Follow us on Instagram
Our app takes the guesswork out of getting pregnant. Get Obie for iOS Now!
Blog » Pregnancy: Blogs

Why Defensive Medicine Scares Me as a Future Obstetrician 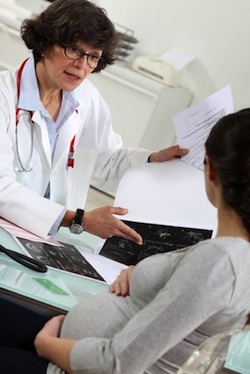 Defensive medicine, which is the practice of recommending tests or treatments mainly to protect a care provider from litigation instead of for the patient’s benefit, is a term that has been widely used in the field of obstetrics lately. It is impossible to have a conversation about the rising c-section rate without discussing the hypothesis of how it is driven by physicians who are often quick to cut because of the fear of being sued. While I do believe that the vast majority of c-sections and obstetric interventions are performed for legitimate medical reasons, there is still a part of me that thinks that the practice of defensive medicine by physicians and care providers has contributed to the rising c-section rate. As a patient and doula, it outrages me that some providers are making decisions that may not always be evidence-based. But as a future obstetrician, I completely get it.

A few months ago, I was reading an article in the local paper about an OB who was sued for several million dollars after she "never considered a Cesarean section on (date), despite signs that (baby's name), now 8, was an unusually large baby, according to the couple's lawsuit." There was a severe shoulder dystocia during the delivery, and the baby suffered permanent nerve damage in his arm as a result. The baby was estimated to be 9-10 pounds, but turned out to be over 11.

I know I don't know everything here. An article in the newspaper isn't going to give the entire picture of what actually occurred. But frankly, it makes me very upset and afraid. If I was in the doctor's position, I wouldn't have recommended a c-section for an estimated 9-10 pound baby with no other risk factors. And I would have been sued millions of dollars for it, lost the case and been forced to give up the practice of obstetrics. I know that many don't agree with doctors who encourage c-sections due to a baby measuring large on ultrasound. But there's no doctor in the world who wants to be sued for that kind of money, and be financially burdened for the rest of his or her life because of it. Wouldn't it just have been easier to do the c-section in this case rather than get sued for millions of dollars for "taking a chance" on a vaginal delivery?

Obstetric lawsuits are settled for dollar amounts like this all the time. Some of them may truly be medical malpractice, and others may not be. Our healthcare system is broken, and I have no doubt that a huge number of doctors feel no other choice but to practice defensive medicine in order to maintain their licenses, certifications, and professional lives.

I’m still years away from being a practicing physician and having to worry about these issues, but nonetheless, I’m scared. I’m scared of being sued despite the fact that I seemingly did everything right. I’m scared of over-ordering tests or procedures when they aren’t necessary just so I can’t be accused of missing something, no matter how minuscule the chances. And most of all, I’m scared of making decisions that are not in the best interest of my patient because its what will protect me the most from litigation.

There's a reason why I'm willing to go through decades of schooling and training to become an obstetrician, and I know that despite these difficult issues, there is no other career path I’d rather take. However, defensive medicine is something that I wish I wouldn’t have to practice. I want to provide care that is the best for mom and baby, not the type of care that my insurance company will want to see. But one of my greatest fears is that someday, I'll be left with no other choice.

The Placenta Is Different in Boys or Girls
Your due date is only accurate if it's calculated correctly
Low Asprin for Preventing Preeclampsia
Depression + Metabolic Syndrome = Elevated Risk for Diabetes
Should You Keep Your Pulse Below 140 When Exercising?
Screening For Depression During Pregnancy and Postpartum
Zika Virus Guidelines for Pregnant Women
Misperceptions are common about Miscarriage
Travel During Pregnancy. A Good Idea?
Pregnancy News May 14th, 2015