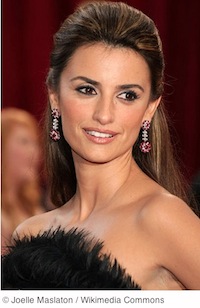 Advocates for breastfeeding in the United States and the European Union call on women to nurse their babies at least 6 months before introducing solid foods and milk from cows. The World Health Organization urges a two-year period of breastfeeding. Not a problem, according to Spanish superstar Penelope Cruz. She describes nursing as “addictive.”

The 39-year-old mother of two expressed her enthusiasm for nursing during a recent photoshoot for Allure magazine. Celebrity photographer Mario Testino took the photos of Cruz at London’s Dorchester Hotel for the magazine’s January 2014 cover story.

Cruz married her sometimes co-star, actor Javier Bardem, in 2010. They have two children - a son, Leonardo, who is 2, and daughter Luna, who is six months old.

As for breastfeeding, Cruz says she nursed son Leo until he was 13 months old and plans to do the same with her daughter. The actress has been very outspoken about her advocacy for nursing and says, “It’s hard when the day comes when you have to stop.” She’s happily addicted to breastfeeding her children.

She further claims that breastfeeding is not the time for a woman to worry about deprivation diets. Breastfeeding causes a woman to burn an average of 500 extra calories a day so a healthy diet in adequate, filling portions is essential. During the Allure interview, she dined on soup, Peking duck, and fish while saying diet would not be a part of the story.

Cruz describes growing up in a close-knit happy family, which may have influenced her decision to embrace breastfeeding so fully. Nursing is said to be one of the best ways to build a strong bond between mother and child.

Her own happy family life and joys of motherhood may have influenced her latest movie, too. The movie, Twice Born, has the desire for motherhood as its central theme. The story takes place in war-torn Bosnia where the struggles of a young woman is revealed. The woman, Gemma, wants to have a child but battles infertility alongside the brutalities of war. Says Cruz, "She talks in a way that is really shocking many times, not very politically correct. Because she had that dream of becoming a mother and [it's] not happening, she says she feels defective."

The film, by Sergio Castellito, is based on a book of the same name by the director’s wife, Margaret Mazzantini. It’s set in 1984 during the Winter Olympics and the Yugoslav Wars. After reading the 700-page book in just a day and a half, Cruz describes being “blown away by the character.”

The film opened in Italy in November and in the US in December 2013.