There are increasing numbers of people in the LGBTQ+ community who are choosing or desiring to become parents. There are usually multiple and sometimes complicated and difficult decisions that need to be made about the various pathways to parenthood for LGBTQ+ individuals. Challenges and decisions include barriers to healthcare, transgender hormonal procedures, and surgeries that may impact a person’s ability to conceive on top of other possible issues involving fertility issues.

In addition, options depend on whether there is a couple or a single person, if one or both partners of the same-sex couple has a uterus and/or ovaries or if both partners produce sperm. Once you have chosen to expand your family, there are many options for getting pregnant and having a baby.

Some legal and medical challenges

According to the American Society of Reproductive Medicine (ASRM), there is  "no sound ethical basis for licensed professionals to deny reproductive services to unmarried or gay and lesbian persons." However, on a case-by-case basis, you still may encounter resistance from some doctors. In addition, laws for same-sex parents can still vary depending on in which state you plan to have your baby.

For example, in some states fertility treatments are denied by insurance companies to LGBTQ couples unless they prove that they are infertile.

In a number of states, a person who is not a legal parent does not have any legal decision-making authority over a child, even if that person lives with the child and functions as the child’s parent. So consulting a lawyer before pregnancy is advisable, so you know your legal rights.

DIY: Do it yourself pregnancies

Same-sex couples where one of them has a uterus can try to get pregnant if the other partner produces sperm, from bought sperms, or sperm obtained from friends through:

One path to parenthood open to all couples including opposite and same-sex couples is choosing a person with a uterus who can carry the pregnancy for them.  The sperm can come either from one of the males, same-sex or opposite-sex males, from a friend, or from a donor sperm bank. The egg can come from the person carrying the baby (surrogate) or from someone else's egg (gestational carrier).

The difference between a gestational carrier and a surrogate pregnancy is where the egg comes from: 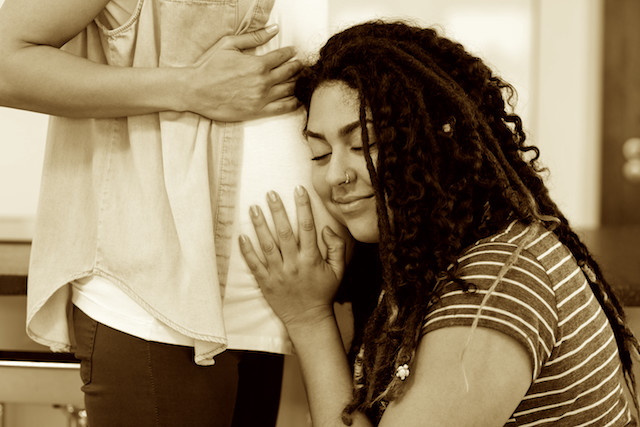 In a same-sex lesbian relationship, where one or both partners have a uterus, donor sperm can be used to impregnate one or both of the parents through artificial insemination or in-vitro fertilization (IVF). Some couples choose to each carry a pregnancy, while others decide to have one person carry the baby (or babies). This all depends on the fertility, health, and preferences of each person in the couple. It may also depend on the health of the partners. In same-sex couples where one has a uterus and the other produces sperm, pregnancy can be achieved from one partner's egg and the other partner's sperm.

In a same-sex relationship where both partners produce sperm, a surrogate or gestational carrier is need for having a baby.

One of the most popular choices in gay and lesbian pregnancy parenting is the co-parent option. Co-parenting occurs when a gay and lesbian couple comes together to raise a child. One or both of the lesbian couples will be impregnated with the sperm of the gay male parent. After the baby is born, the couples choose to raise the child together as one family. The impregnation may occur through sexual intercourse or in-vitro fertilization.

The cost of LGBTQ Pregnancy

If one of the partners in a same-sex lesbian relationship decides to become pregnant, costs can vary between little to no additional expenses in "DIY" do it yourself pregnancies without fertility issues to several thousands of dollars if sperm needs to be bought and doctors get involved with artificial insemination or in-vitro-fertilization which can cost $10-20,000 per cycle.

The cost of surrogacy and gestational carriers can cost well over $100,000

Donor parenting and co-parenting are the least expensive options. Generally, there is very little added cost to these pregnancies outside the traditional prenatal and birthing care. Any extra costs would occur as a result of receiving the donor sperm and in-vitro fertilization.

Becoming a parent is an exciting time filled with love and joy. When a gay or lesbian couple wants to expand their family, the options are vast and the chances of becoming a parent are high.