Track your fertility to get pregnant faster!
Getting Pregnant » Implantation 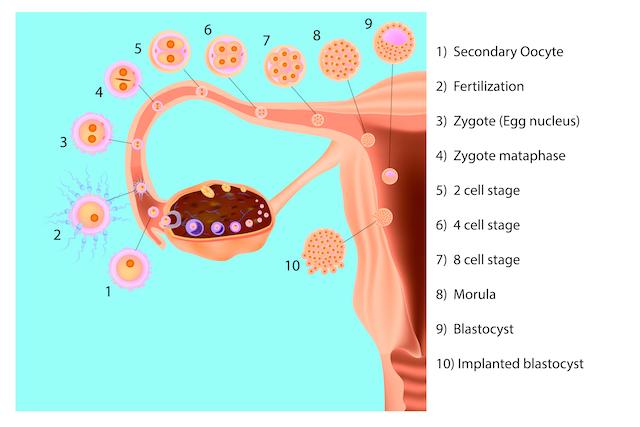 How do you know that implantation has occurred?

Implantation is the attachment of the fertilized egg, the embryo when the fertilized egg (now called a blastocyst) has completed its travel through the fallopian tube and adheres to the lining of the uterus. Implantation happens about a week after ovulation with a range of 6-12 days after fertilization.

At the time of ovulation, the egg is released from the ovary. Fertilization of the egg by a sperm usually happens within 12-24 hours after ovulation in the distal part of the fallopian tube. The egg/sperm combination is now called a "zygote" and begins traveling down the Fallopian tube towards the uterus. During that time the fertilized egg multiplies into first 2, then 4 and then 8 and more cells. The fertilized eggs which by then is known as the blastocyst enter the uterine cavity about 5-6 days after fertilization and adheres to the lining of the uterus within 1-2 days (6-9 days average after ovulation/fertilization) after reaching the uterus.

Are there implantation symptoms?

The blastocyst is a cluster of tiny cells, smaller than the head of a pin. Most women have no symptoms on that day. Some women report some spotting or bleeding around the time of implantation. Most women report this bleeding to be brown in color though some mention it to be more reddish. Most women report at most a few drops of blood — maybe one to two small red or brown spots in the underwear, though others report a more substantial amount but rarely if ever does it approach the appearance of menstrual bleeding. If your bleeding is similar to a menstrual period, chances are that it's not implantation bleeding.

It's likely that most women who become pregnant do not experience implantation bleeding, and many women experience some spotting but they are not pregnant.

If you experience bleeding regularly after ovulation and you are not pregnant then you may want to discuss with your doctor whether some tests can be done to make sure everything is OK.