Sign up for the waitlist for our new app, Obie!
Pregnancy » Complications » Multiples

When Twins Are Conceived Weeks Apart 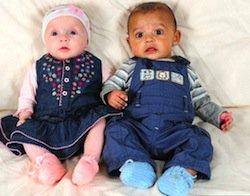 It is possible to conceive twins who have the same gestational age, who can have different fathers. It is a process called superfecundation. In superfetation, one fetus implants on top of another fetus and both are at different stages of gestational age.

Superfetation manifests as the formation of an embryo from a different cycle while another embryo or fetus is already present in the uterus. When two separate instances of fertilization occur during the same menstrual cycle, it is known as superfecundation.

For superfetation to happen, two things have to happen:

1. You have to ovulate twice (dizygotic) several weeks apart

2. You did get pregnant again after the first fetus has already implanted

Multiple ovulations happen in about 1% or more of all ovulations, more often so when you take ovulation-inducing medications, but they usually happen with a day of each other.

The result of two pregnancies happening weeks apart is that the two twins are in different developmental stages and one fetus is more advanced in pregnancy than the other. This is an extremely rare event in humans and has been reported only a few times. Superfetation can happen with the same father or different fathers.

Superfecundation happens when twins are conceived by different fathers, usually within a couple of days from having sex with different men but from ovulation happening on the same day or within a few days.