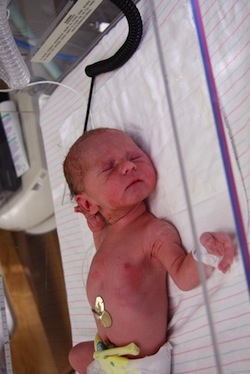 Retinopathy of prematurity, called ROP in the medical community, affects premature infants and newborns. The disease can be mild or severe. When first diagnosed in the 1940s, the condition was called retrolental fibroplasia. At that time ROP was the number one cause of childhood blindness. With advances in medical technology and treatment, smaller, younger infants are surviving and the rate of ROP is on the rise.

Experts believe gap junctions caused by hyperoxic extrauterine conditions may be the cause of ROP. The “gaps” make it difficult, or impossible, for proper vascular growth. It is estimated at up to 50% of infants born weighing less than 2.75 pounds at birth will develop ROP. ROP often leads to irregular blood vessel growth after birth.

Mild Versus Severe Retinopathy of Prematurity
There is little known about why some cases of ROP resolve with immediate treatment and other cases advance. Two infants presenting with the same clinical condition can be subject to identical treatments and one patient may resolve while the other develops a more severe condition. Experts suspect genetics play an important part on treatment effect.

There are five stages of ROP. Patients are assessed for various factors before the disease is staged.

Symptoms of Retinopathy of Prematurity
Mild and moderate stages of ROP require an eye exam to diagnose. Typically, eye exams are part of the patient workup if risk factors for ROP exist, including prematurity or very low birth weight. Severe cases may be diagnosed with eye exam are symptoms are recognized. Symptoms may include:

Prognosis
About 10% of infants with ROP will develop a more severe stage of the disease. Lasting vision problems and blindness may occur. However, most mild cases resolve with treatment.