What Is the Apgar Score? 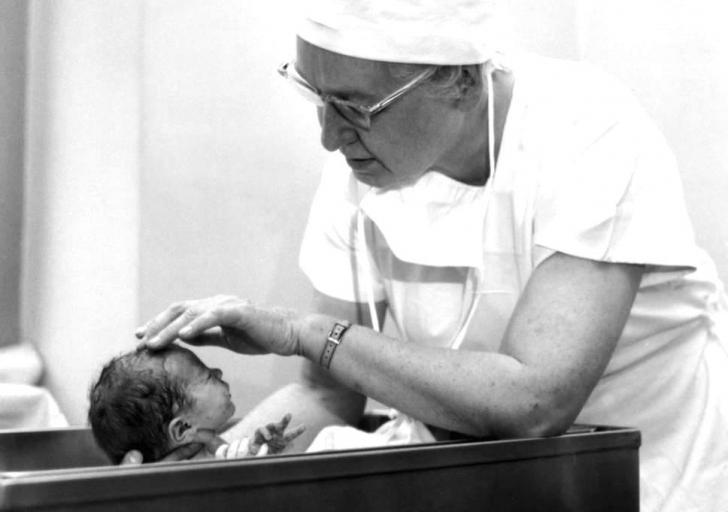 The Apgar score is named after a New York anesthesiologist, Dr. Virginia Apgar, who in 1952 described the score as a means to assess the baby's status 1 and 5-minutes after birth.

This is how it’s done: At one minute and again five minutes after birth, the nurse or a doctor examines the baby and checks her for five different parameters: The baby’s heart rate is counted, breathing is checked, reflexes are assessed, muscle tone is evaluated and the baby’s color is checked. Often there is an alarm clock above the crib making sure these tests are done exactly on time.

Each of these 5 parameters is given a score of between 0 and 2 at 1-minute and 5-minutes after delivery and the scores are added up for the total Apgar score.. If you were told that the Apgar score of 7 and 8, for example, the score most likely was 7 at 1 minute and at 5-minutes it was 8.

The lowest total score is 0, the highest score is 10. There are no extra points for a really cute baby.

The first 5-10 minutes right after birth are extremely important to the baby. The main reason why your doctor wants to do the Apgar score is to find out how the baby is doing, and whether she needs some further support to breathe right after birth. Inside the uterus, the baby was ‘breathing’ and received oxygen and nutrition through the umbilical cord. Once the baby is delivered, the oxygen does not come from the umbilical cord anymore but needs to be delivered through the lungs by the baby taking breaths. So the baby’s very first breaths and color will determine whether the lungs are expanding well and deliver oxygen from the air through the lungs to the baby.

The Apgar score will thus help the doctor figure out the answer to the following questions:

Of the two scores, the 5-minute Apgar score is more important than the 1-minute score because it takes some babies normally a little longer than others to start moving around and breathing normally.

Many researchers have tried to predict future outcomes and problems based on the baby’s Apgar scores. As of today, there is no conclusive evidence that infants’ long-term outcomes, either good outcomes or not so good outcomes, are directly related to their Apgar scores.

In addition, the question sometimes comes up whether a low Apgar score shows that the baby has not received enough oxygen (hypoxia) in labor.

To clarify this, the American Academy of Pediatrics and the American College of Obstetricians and Gynecologists came out with a joint announcement which includes the following statements:

1. ”The Apgar score is useful in assessing the condition of the infant at birth.”

2. “The Apgar score alone should not be used as evidence that neurologic damage was caused by hypoxia that results in neurologic injury or from inappropriate intrapartum treatment”

3 “A low 1-minute Apgar score does not correlate with the infant's future outcome.”

4. “The 5-minute Apgar score, and particularly the change in the score between 1 and 5 minutes, is a useful index of the effectiveness of resuscitation efforts. “

5. “However, even a 5-minute score of 0 to 3, although possibly a result of hypoxia, is limited as an indicator of the severity of the problem and correlates poorly with future neurologic outcome”

Don’t try to predict from the Apgar scores whether your daughter will become President of the United States. Or go to Harvard or Yale. Or marry happily and have 10 children. But you can rest reassured that with your support all options are open to her to become a very successful and hopefully a happy person.