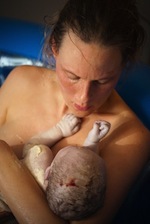 In January 2014, the Midwives Alliance of North America (MANA) published a study in the Journal of Midwifery and Women’s Health: Outcomes of Care for 16,924 Planned Home Births in the United States, aka the “2014 MANA study.” A press release was written to announce it, written by former MANA president, Geradine Simkins. It was the press release heard ‘round the (home birth) world! Unfortunately, it was full of misinformation.

First, there was this: “Of particular note is a cesarean rate of 5.2%, a remarkably low rate when compared to the U.S. national average of 31% for full-term pregnancies”

But 31% is the overall c-section rate, all risk levels, repeat cesareans, everything. Majority of the women in the MANA study were low risk and have had a previous vaginal birth (and no cesarean history). A similar group of women giving birth in a hospital would have a cesarean rate much lower than 31%. To give you an idea, the primary cesarean section rate for women (low and high risk) giving birth in a hospital who have had a previous vaginal birth is 11.5%. Using the 5.2% versus 31% comparison is misleading.

The press release goes on and on about the safety of home birth that this new study supposedly proves. “Babies born to low-risk mothers had no higher risk of death… than those in comparable studies of similarly low-risk pregnancies,” Simkins claims. But is that really so?

Here are the mortality rates (excluding lethal anomalies) for babies born to low risk women that were confirmed to be alive at the start of labor but die either during birth (intrapartum) or in the first week of life (early neonatal):

A baby is 3 to 6 times more likely to die at a home birth than in a hospital. So Simkins clearly wasn’t referring to a hospital birth comparison with her claim. How, then, does home birth in the USA compare to home birth in other countries?  Like, say, the Netherlands? Using the same parameters as above, we have:

Twice as high as the Netherlands. Meaning, for every 10,000 births of low risk women, there are 6-7 babies that die in the USA during planned, midwife-attended home births that would have lived if the mothers were giving birth at home in the Netherlands.

Babies born to low-risk mothers had no higher risk of death? Where did Simkins find evidence to support this statement? Not from the MANA study.

Previous: Are Infant Simulators a Good Idea for Women?
Next: Danielle Repp, Blogger