Can My Baby Girl Be Having a Period? 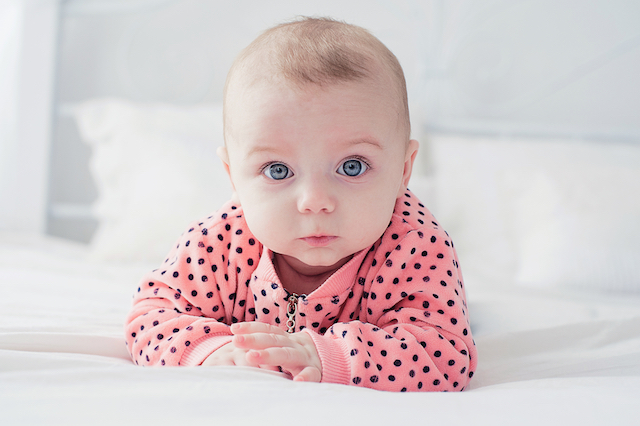 You've just given birth to a baby girl and you've decided to breastfeed. After about a week at home you notice her breasts have these little lumps and she passing pink or red discharge in her diaper. Is this a problem or is this a normal part of caring for a breastfed infant girl?

Your Hormones are Her Hormones
When a woman breastfeeds she passes her hormones to baby. Pregnancy hormones are all out of whack and it takes many months for the female body to return to normal hormone levels after birth, which means you're passing higher levels of reproductive hormones to baby when you breastfeed. During pregnancy your infant also comes in contact with reproductive hormones, so breastfeeding is not necessarily a precursor for infant menstruation, but in my experience I was breastfeeding. According to medical professionals, breastfeeding is not a precursor to what is often called false menstruation.

These increased hormones can cause small lumps to form in the breasts, for both male and female infants. Female infants may also experience what can be called a menstrual cycle that may last about one week. Some baby girls only experience the bleeding for a day or two and others don't experience it at all.

When Should You Worry?
If bleeding is bright red and looks like a menstrual cycle you'd have, you need to contact the pediatrician. You should also talk with her doctor if the bleeding lasts for more than one week or if she appears to be in pain. I asked my pediatrician about the vaginal bleeding with all my children and even talked with him about the breast lumps my baby boy developed and each time I was told it was a natural part of the hormone process associated with breastfeeding.

Keyword Tags:
menstrual period
Breastfeeding
hormones
Previous: Puberty at 3 Months Old: What Would You Do?
Next: Do Twins Act the Same In Utero?