2011 “Biggest Loser” Winner Has Baby on the Way

Most women who win $260,000, a new vehicle, and a helicopter ride over New Zealand would think they’d won the jackpot. Olivia Ward did just that, as the season 11 winner of the TV reality show, The Biggest Loser. Ward won the goods and lost 129 pounds in the process but has just recently announced she’s found the real pot of gold at the end of the proverbial rainbow.

She is pregnant with her first child, a feat that could not have happened without her life-changing experience as a Biggest Loser. In addition to being dangerously overweight, Ward has polycystic ovarian syndrome (PCOS), a medical condition that makes pregnancy difficult. She was told her only hope at motherhood was to lose weight. A lot of weight. 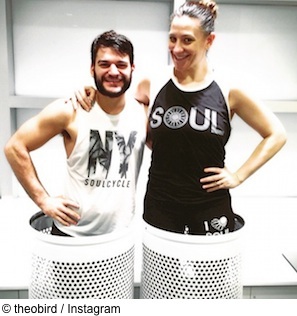 Ward, 39, and her husband, Ben, were married in 1998, shortly after she graduated from the University of Alabama with a degree in vocal performance. She moved on to Boston where she earned two master’s degrees (in voice and opera performance) from the New England Conservatory in 2002.

Ward, a mezzo-soprano opera singer, enjoyed performing in operas across the country but felt her weight might be limiting her chances for professional success. When she was diagnosed with PCOS, she knew her chance of having a baby was almost non-existent unless she made dramatic changes in her life.

She and her sister, Hannah, were chosen to be contestants on the 11th season of the weight-loss reality TV show. They competed as a couple in the show’s fourth season featuring contestant couples. When the competition started, Olivia, then 35, weighed 261 and her BMI was 38.5. Hannah, 32, weighed 248, with a 37.7 BMI.

The sisters proved to be fierce competitors during the 20-week run of the season. They set a record for the show as the first couple to enter the grand finale, competing against each other after all other competitors were eliminated.

While the sisters were competing, hubby Ben, a musician, was not sitting idly at home. He played along with the game on his own time, only he played solo, without the benefit of personal trainers, dieticians, competition, prize money, and the pressure of millions of people watching his every weigh-in. He dropped 90 pounds in the process.

Olivia, now a SoulCycle instructor in New York City, is in her second trimester and is expecting a son in August. She recently told Us Weekly magazine that she’s “been blessed to not have any morning sickness so far.” Calling her pregnancy a blessing “is an understatement,” according to Ward, who said, “We have wanted children for along time which makes this gift so incredibly special.”