Follow us on Instagram
Our app takes the guesswork out of getting pregnant. Get Obie for iOS Now!
Pregnancy » Ultrasound 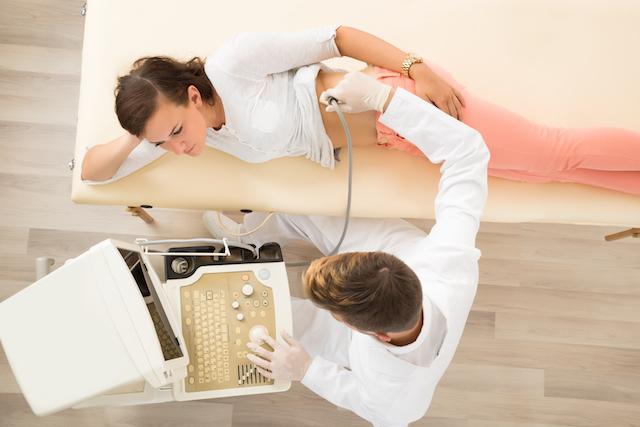 Why get an ultrasound?

Which ultrasound and sonogram fetal measurements can be calculated during pregnancy?

babyMed has the most extensive list of ultrasound and sonogram tools and calculators available. The ultrasound shows many critical pregnancy structures and embryo measurements—eight essential features are described below.

Get our Childbirth Course via email to learn all about labor, pain relief, natural options, and get ready for baby and breastfeeding!

The gestational sac (GS) is a structure that surrounds an embryo and is likely the first pregnancy structure that can be seen on ultrasound in early pregnancy, usually by 6 gestational weeks of the pregnancy. The GS encloses not only the embryo but also the amniotic fluid, which helps to nourish and protect the developing baby. The gestational sac is the structure ultrasound technicians look for when they need to confirm the presence and viability of early pregnancy, either inside the uterus or as an ectopic pregnancy outside the uterus. It can be used to determine if an intrauterine pregnancy (IUP) exists prior to the visualization of the embryo. It can be measured across and the weeks of the pregnancy can be determined with about 5-day accuracy.

The yolk sac is a membranous sac attached to the embryo. It can be seen on ultrasound between the embryo and the gestational sac. The yolk sac functions as a means for the nourishment of the embryo before the circulatory system and the placenta develop. Measurements of the yolk sac's size and shape are important when assessing the pregnancy.

The fetal pole is amass of cells before the embryo is visible. It grows at a rate of about 1 mm a day, starting at the 6th week of gestational age. Thus, a simple way to "date" an early pregnancy is to add the length of the fetal pole (in mm) to 6 weeks. Using this method, a fetal pole measuring 5 mm would have a gestational age of 6 weeks and 5 days.

The crown-rump length measurement is the distance between the top of the embryo and its rump. It can be measured between 7-13 weeks of the pregnancy and gives an accurate estimation of the gestational age. Dating with the CRL can begin within 3-4 days of the last menstrual period. An important point to note is that when the due date has been set by an accurately measured CRL, it should not be changed by a subsequent scan. For example, if another scan done 6 or 8 weeks later says that one should have a new due date which is further away, one should not normally change the date but should rather interpret the finding as that the baby is not growing at the expected rate.

This is the diameter between the two sides of the head and is measured after 13 weeks. It increases from about 2.4 cm at 13 weeks to about 9.5 cm at term. Different babies of the same weight can have different head size, therefore, dating in the later part of pregnancy is generally considered unreliable. Calculate the fetal measurements here.

Use our head circumference calculator!

This measures the longest bone in the body and reflects the longitudinal growth of the fetus. Its usefulness is similar to the BPD. It increases from about 1.5 cm at 14 weeks to about 7.8 cm at term. (Chart and further comments) Similar to the BPD, dating using the FL should be done as early as is feasible.
Femur length calculator

The single most important measurement to make in late pregnancy. It reflects more of fetal size and weight rather than age. Serial measurements are useful in monitoring the growth of the fetus. AC measurements should not be used for dating a fetus.

The weight of the fetus at any gestation can also be estimated with great accuracy using polynomial equations containing the BPD, FL, and AC. For example, a BPD of 9.0 cm and an AC of 30.0 cm will give a weight estimate of 2.85 kg. To calculate the estimated fetal weight, four measurements (AC, BPD, HC, FL) are entered into a mathematic formula. There are many different formulas for weight estimation, and even the best ones have a 15% margin of error in 85% of all fetuses. In other words, about one in seven fetuses will weigh 15% more or less than estimated. The babyMed estimated fetal weight calculator will calculate for you the range of weights based on different formulas.

The table below shows typical measurements seen during each week, starting at 4 weeks of gestation.

Ultrasound Measurements in Pregnancy: Measurements (in mm) represent the mean values for each gestational age week.