Chelsea Clinton wowed the audience, including her mother, when she made the April 17 announcement that she is pregnant. She and her mother, former Secretary of State Hillary Clinton, were on stage in New York City at the Lower Eastside Girls Club, taking part in "Girls: A No Ceilings Conversation," an event funded by the Clinton Foundation.

In an October 2013 interview with Glamour magazine, Clinton said she and investment banker hubby, Marc Mezvinsky, wanted a family badly enough that "we decided we were going to make 2014 the Year of the Baby." At the NYC event, she basically proclaimed mission accomplished: "Marc and I are very excited that we have our first child arriving later this year." 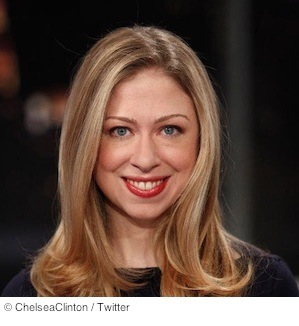 Clinton, 34, didn't divulge any further details — gender, birth date, and such — but she did thank the "many strong, young female leaders" attending the event for "inspiring me and thank you for inspiring future generations." The "No Ceilings" mission is "to help continue the conversation on breaking ceilings for women and girls everywhere," according to the Clinton Foundation website.

Chelsea Victoria Clinton was born in 1980 in Little Rock, Arkansas, while her dad, Bill Clinton, the 42nd President of the United States,  was serving his first term in office as governor of the state. The name, Chelsea, was chosen long before the baby's birth. In 1969, Judy Collins recorded a Joni Mitchell song, "Chelsea Morning," that Bill liked so much he told his wife, "If we ever have a daughter, her name should be Chelsea."

Chelsea was not quite 13 when the Clintons left Little Rock for the White House in 1993. Chelsea did not like the publicity she was creating at public school in DC so she transferred to a private school. After high school graduation, she earned degrees at Stanford, Oxford, and Columbia University.

Marc Mezvinsky was born in the political limelight in 1977. His mother, Marjorie Margolies-Mezvinsky represented Pennsylvania in congress and his father, Edward Mezvinsky, was a congressman from Iowa.

The Mezvinskys and Clintons were friends on retreat in South Carolina when their children met for the first time in the 1990s. By 2005, Chelsea and Marc were said to be dating. They became engaged in 2009 and married in New York City in 2010. The wedding feast was vegan and the cake was gluten-free. They live in Manhattan.

The Clinton grandparents-to-be took to the Twittersphere to share their elation over the good news. Bill tweeted he is "excited to add a new line to my Twitter bio...grandfather-to-be!" and Hillary proclaimed grandmother-to-be is "my most exciting title yet."