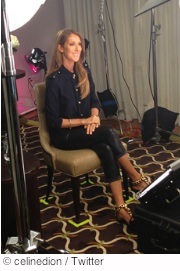 Sometimes when we struggle with life’s biggest challenges, it helps to know the same problems plague even the rich and famous. Infertility, for example, is experienced by women in all walks of life. The glitz and glamour of celebrity life loses its sparkle when having a healthy baby seems impossible. Canadian singing sensation Celine Dion knows this. She endured seven cycles of in vitro fertilization (IVF) therapy to have her three children and, at age 45, wants more. According to Dion, “there’s nothing that can top being a mother.”

Dion tried for years but was unable to conceive. She eventually turned to a fertility clinic for IVF procedures at age 33. Soon her son, Rene-Charles, now 12 years old, was born. And soon after, Dion wanted more.

Dion herself is the youngest of fourteen children, who grew up in a family she describes as happy though financially challenged. Perhaps fond memories of her crowded childhood fuel her desire for a larger family.

She turned again to IVF with the hope of conceiving another child. After six cycles “one after the other,” twins were on the way. Her sons, Nelson and Eddy, are now 3 years old.

The songstress of international fame says taking it easy during pregnancy is the secret to having three healthy babies. “I always say my children’s first country is inside of me so I try to make it a good one and be healthy,” she says.

To create that healthful environment, Dion made it a point to avoid as much stress as possible during her pregnancies. It was important to her to relax and maintain a positive mental outlook, knowing her own emotions would have an impact on the children she was carrying.

When Dion was only 12 years old, she composed her first song, with the help of her mother and brother, Jacques. Another brother, Michel, sent the recording to a music manager whose name he found on the back of a record album. That music manager, Rene Angelil, claims to have been moved to tears by the sound of Dion’s voice and vowed to make her a star. He mortgaged his home in 1981 to finance her first album, which became a #1 hit in Canada and propelled her onto the international stage. Angelil, now 71, married Dion in 1994 in a wedding extravaganza that was broadcast live on Canadian TV.

Dion says she’d like to have more children and that age doesn’t rule out the possibility but, she says, “it’s selfish to keep wanting more.” Even so, she’d be thrilled to have a daughter.