It's a Girl! Kate Middleton Gives Birth to Royal Baby #2 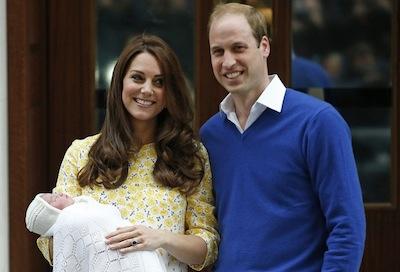 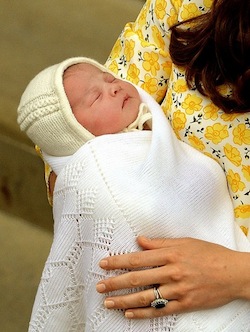 UPDATE / May 4, 2015 — It's official! The little princess, born on Saturday, May 2, to the Duke and Duchess of Cambridge has been named. She is now officially known as Her Royal Highness Charlotte Elizabeth Diana of Cambridge. William and Kate have chosen a name rich in royal ancestry.  Charlotte is a feminine form of the name Charles, in honor of her paternal grandfather, Prince Charles. Elizabeth pays tribute to the baby's paternal great-grandmother, the United Kingdom's reigning monarch, Queen Elizabeth II. Diana memorializes the late Princess Diana, mother of Prince William.

Baby #2, a girl, was born to the Duke and Duchess of Cambridge on Saturday, May 2, at 8:34 AM London time. The baby, whose name has yet to be announced, was visited in the hospital by her big brother, Prince George, who will turn 2 in July.

Prince William and Catherine Middleton left from Kensington Palace in the pre-dawn hours to arrive at St. Mary’s Hospital for the birth of their daughter, who weighs 8 pounds, 3 ounces, and was nine days late. Her daddy, present at her birth, was also born at St. Mary’s in June of 1982. Prince George was born there, too, in 2013.

Less than 12 hours after giving birth, mom Kate wowed the crowd as she made her exit from the hospital wearing a cheerful yellow and white flower-print frock. The little princess made her first public appearance wearing a pale yellow knit bonnet and wrapped in a white shawl.

Earlier in the day, the men in the family made fashion headlines, too, when Prince William brought Prince George to the hospital to meet his baby sister. Both princes sported crisp white shirts under blue long-sleeved sweaters. Dad’s blue jeans were long but the little prince wore blue short pants with matching knee socks. Fashionistas noted that even their hair was combed the same way. Prince George was spirited away via private entrance before William and Kate presented their daughter to the world.

William, Kate, and their new daughter returned to Kensington Palace, where the family will remain for a few days before departing for their home in Norfolk, in eastern England. Prince William is said to be on paternity leave until June 1 from his job as a helicopter ambulance pilot.

Although the Duke and Duchess chose not to learn the baby’s sex in advance of her birth, her great-grandmother seemed to be prepared for any outcome. A proudly beaming Queen Elizabeth II made a royal appearance at Richmond Castle just hours after the child was born and she was wearing pink from head to foot.

Anticipation of the baby’s name has kept speculation alive since the announcement of Kate’s second pregnancy. Some people are betting on a traditional name while others are expecting the modern young couple to name their daughter something a little more unique.


Others are hoping the baby will be named after her paternal grandmother, the late Princess Diana, and others are betting she will be named Elizabeth after her great-grandmother. Victoria is considered a likely contender, too, after Queen Victoria, who reigned 63 years and seven months, longer than any other British king or queen in history and longer than any female monarch ever.

There could be plenty of time left to place a bet on her little highness’s name. Her big brother was two days old before his name was officially announced.

Path to the Crown

The little princess is fourth in line to the throne of Britain. Standing between her and the crown is her grandfather, Prince Charles, then Prince William, followed by Prince George. Her birth moves her uncle, Prince Harry, one step away from the crown in the royal line of succession.