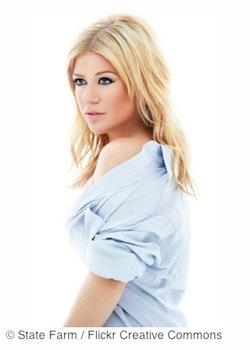 Did Ellen get offended? Grossed out? No, she just laughed. That’s Ellen.

Clarkson isn’t on some crazy purge-based diet and she doesn’t have any exotic contagious disease, either. She’s pregnant. And miserable, she says. “Miserable...but so happy I’m pregnant,” according to the new mom-to-be.

Clarkson, 31, and hubby, Brandon Blackstock, are expecting their first child together next year. Clarkson is still in the first trimester of the pregnancy - 11 weeks when she appeared on The Ellen DeGeneres Show - and the experience, although filled with joy, is not what the award-winning singer expected.

Clarkson says that pregnancy glow she’s heard so much about just isn’t happening with her. The morning sickness is keeping her busy, so busy she claims there’s only been one day so far she hasn’t been sick. Her hair is falling out and her nails are too short, according to Clarkson. She’s also so envious of women claiming to not be terribly affected by morning sickness she claims she wants to “hit all of them with my car.” Good thing she’s still got a sense of humor and too many trips to the bathroom to throw up that there’s not much driving time in her day at the moment.

The couple married in October 2013. Blackstock is the son of Clarkson’s manager, Narval Blackstock. The wedding wasn’t exactly what the singer expected, either.

Clarkson and Blackstock wrote their own marriage vows and, at the moment she needed to speak them, Clarkson says she became so very emotional she bawled so hard it took her an hour to voice her vow to her new husband. In her typical self-deprecating way, she describes the teary scene as “not pretty” and “so bad” her videographer hasn’t let her see the tape of the ceremony yet.

It’s too soon to know the baby’s gender but its name has already been chosen. Clarkson says the name is a unisex baby name and will work if it’s a boy or if it’s a girl.

Blackstock has two other children by a previous marriage.