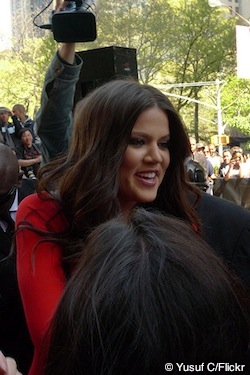 Rumors have persisted for months surrounding Khloe Kardashian's fertility troubles, but on this week's season finale of Keeping Up With the Kardashians, the public finally learned the truth.

Khloe, one of six children and aunt to two, has always been vocal about her desire for children. She and husband, Lamar Odom, have been trying for two years, unsure as to why they had yet to conceive. It took big sister Kim to convince Khloe that she should finally see a fertility specialist.

After a couple trips to the doctor and numerous tests, Khloe learned that she was not ovulating. Khloe's doctor explained her test results and stated, "Your gonadatropin levels are supposed to be in kind of a certain range and they're not in that range. When this is high it means that you don't make eggs...I'm gonna suggest that it may be helpful for you to take something to help you ovulate."

A teary-eyed Khloe spoke to the camera after learning the news and said, "Right now I'm freaking myself out cause like, who doesn't produce eggs?" Though we know all too well that Khloe isn't the only woman struggling with infertility and anovulation, learning this disheartening news frequently triggers an emotional reaction in many women and couples.

Fortunately for Khloe, and many other women dealing with infertility, there are many infertility treatments and alternative options available, and still lots of hope for having children.

We wish Khloe and Lamar the best and are hopeful for good news on next season of Keeping Up With the Kardashian's.