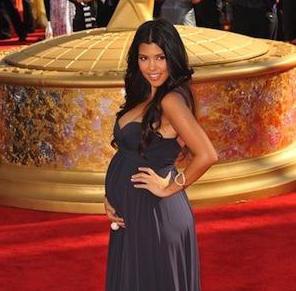 Kourtney Kardashian, 32, the eldest of the famous Kardashian clan, known for their reality tv show and nonstop paparazzi following, recently announced she is just 9 weeks pregnant with her second child. This will be the second child for Kourtney and her partner Scott Disick, whose son Mason turns 2 on December 14th.

Though expectant mothers frequently wait until the end of the first trimester (12 weeks) to share their news, Kourtney couldn’t wait past the 9-week mark, sharing with US Weekly that she felt “confident” in the pregnancy. In her announcement to E! (home of the family’s show, Keeping Up with the Kardashians) Kourtney stated, “Scott and I are so excited to announce that we are expecting our second child and are thrilled to be expanding the love in our family.” According to Kardashian, she woke Scott up at 7 am to share the news of her positive pregnancy test.

The happy news for the family comes in the wake of the scandalous end to sister Kim’s 72-day marriage to NBA player Kris Humphries, whose engagement and wedding was filmed for an E! special and watched by millions. Kourtney and partner Scott have also had their fair share of negative press, as Scott, who struggles with alcohol abuse, was shown behaving badly on numerous occasions on the family’s reality tv show. The couples’ trials and tribulations continue to be viewed by the public, though Scott’s positive lifestyle changes appear to have been a huge step in the right direction for the family.

Despite Scott’s turnaround, Kourtney’s mother, Kris Jenner, wife of Olympian Bruce Jenner and “momager” (mom + manager) of the entire clan, has been less than tight-lipped with her feelings regarding the couple’s decisions. In an episode of last seasons’ show, Kris confronts Kourtney with her opinion that she should be married before trying for more children. Kourtney, whose parents (Kris and the late Robert Kardashian) got divorced when she was a child, has said that she does not want her children to go through a parents’ divorce the way she did, and therefore will wait until she is 100% sure.

While Kim Kardashian took to Twitter to express her joy at her sister’s news, younger sister Khloé has also been forthcoming with her own pregnancy experience. She recently went on The Today Show and admitted that she is having difficulty conceiving. Khloé stated: “It’s so hard. I never knew about ovulation and the limited amount of time that you have to get pregnant…No one ever taught me that.”

Congratulations to Kourtney and Scott and we wish Khloé all the best on her fertility journey!