Fans of Mila Kunis have kept a close eye on everything she does, everything she wears, since she won hearts portraying Jackie Burkhart in the Fox network's highly acclaimed TV series, That '70s Show, which premiered in 1998. Fans have watched every on- and off-screen move of Jackie's hunky love interest, too, played by Ashton Kutcher. They made such a cute couple on screen, many fans wondered if there wasn't some off-screen chemistry inspiring their roles. 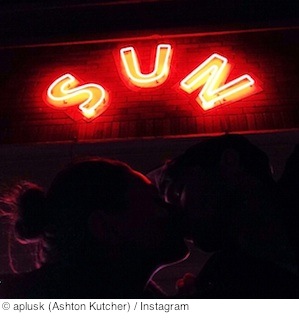 It took a while, but Kunis, 30, and Kutcher, 36, have appeared to be happily in love since they began dating in 2012. Their romance escalated when they announced their engagement in February 2014.

Kunis has been flashing an enormous engagement ring but it's not the bling that's getting attention these days. The oversized sweaters and baggy shirts she's been wearing lately seem to hint of a baby bump under all those clothes although no official announcement has come from the privacy-craving couple themselves.

Kunis was born in the Ukrainian Soviet Socialist Republic (now Ukraine), but moved to Los Angeles in 1991 when she was 7. Kunis describes her earliest years as "very lucky" and "not poor" but the family emigrated so Kunis and her brother would have better opportunities in life.

The second day Kunis was in the US, she started second grade without knowing a word of English. At 9, she started acting lessons and soon landed a role in a Barbie commercial.

Kunis's acting career continued with minor roles on television and in film until 1998, when That '70s Show made her an American sweetheart. It was audition policy with the show that all actors vying for a role must be at least 18 years old so 14-year-old Kunis claimed to be 18, knowing someday she would be 18. By the time the show's producers caught on, Kunis was irreplaceable.

Kutcher was born in Cedar Rapids, Iowa, and has an older sister and a fraternal twin brother, Michael. Michael was born with cerebral palsy and a heart condition that led to need of a transplant when the brothers were adolescents. His brother's poor health cast a shadow of such sadness on young Ashton that he considered suicide at 13 so his brother could have a heart, but fate spared him. The successful transplant was done when the boys were 13.

In 1998, Kutcher lost a modeling competition to Josh Duhamel but landed gigs with Calvin Klein and in Milan and Paris. After a move to Los Angeles, Kutcher won the role of Michael Kelso during the first round of auditions for That '70s Show.

Kunis and Kutcher worked together on the sitcom until 2005, when Kutcher left as a regular character but returned for frequent guest appearances. Production of the show ended in 2006, after eight seasons.