They’re here! The Duke and Duchess of Cambridge arrived in New York City on Sunday, December 7, to begin a whirlwind tour of the Big Apple. It’s the first visit to NYC for Prince William and his bride, the pregnant Kate Middleton. The ever-dazzling Duchess is in the second trimester of her second royal pregnancy and, after a difficult time with hyperemesis gravidarum (severe morning sickness) early on in both pregnancies, she seems to be doing quite well these days.

The American Society for Reproductive Medicine considers the second trimester the safest for travel during pregnancy and the Duke and Duchess seem to be making the most of good travel timing. 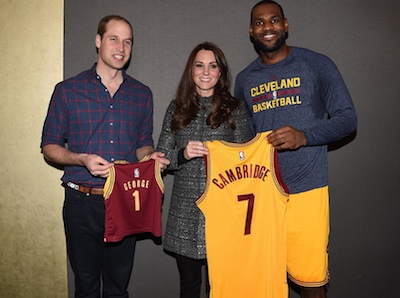 After a late arrival on Sunday, the couple attended a fundraising dinner party hosted by the American Friends of the Royal Foundation; the charitable foundation, chartered to recognize good causes, is run by the Duke and Duchess as well as the Duke’s brother, Prince Harry.

The couple’s itinerary for Monday kept them busy from morning till night:

Today’s royal travel plans started with a visit to the National 9/11 Memorial and Museum. A steady downpour did not stop them from leaving a floral bouquet and a note handwritten by the Duchess.

The couple then toured The Door and CityKids, two charities devoted to child development, before attending a reception at NeueHouse where British arts in NYC were celebrated.

Prince William will meet with with NYC Mayor Bill de Blasio and British entrepreneurs at the Empire State Building.

The day ends with a gala dinner for 450 at the Metropolitan Museum of Art, where Tom Hanks is slated to give an after-dinner toast and the acclaimed opera singer, Renee Fleming, will perform. The event is a fundraiser for scholarships to St. Andrews University in Scotland, where the Duke and Duchess were students when they met. Hanks’ daughter also attended St. Andrews.

After dinner, it’s an overnight return flight home to London and to one-year-old Prince George, who did not accompany his parents on this trip, their second visit to the United States. The couple toured California in 2011.