While TJ Oshie wowed the world during his performance against the Russian hockey team at the 2014 Winter Olympic Games in Sochi, Russia, his #1 fan cheered him on from home in St. Louis, Missouri. His “smokin’ hot” fiancee, Lauren Cosgrove, couldn’t make the trip because she’s eight months pregnant, but she didn’t miss a minute of his exciting game. It was so exciting “I might go into labor,” she joked. 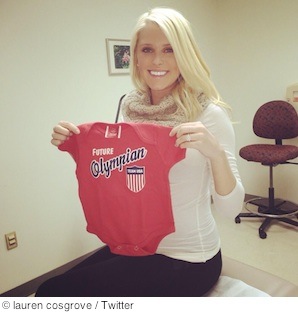 The couple met in North Dakota and dated for three years before Oshie popped the question on their dating anniversary just before flying off to Russia. “He’s been a heart-throb for a while, here in St. Louis,” Cosgrove said and she fully expects his adoring fan base to go global now.

Oshie himself almost didn’t make it to Sochi. Just two months ago, his place on the Olympic team roster wasn’t a sure thing but his long list of shootout successes secured a spot on the team for him. On January 1, 2014, Oshie and fellow St. Louis Blues teammates Kevin Shattenkirk and David Backes were officially named to the US Olympic men’s hockey team.

Although only 27, Oshie’s history on the ice is long. He was born in Mount Vernon, Washington, and grew up in Everett, 25 miles north of Seattle. By age 4, he was playing in the Seattle Junior Hockey Association where he would continue to play for the next ten years.

Oshie’s parents divorced in 2002 and, shortly thereafter, he transferred to high school in Warroad, Minnesota, (population 1,770) where his father moved. Warroad has earned the moniker “Hockeytown, USA,” because every US men’s hockey team that has won a medal during the Winter Olympics included at least one player from Warroad. Some highlights of Oshie’s hockey career include:

On his Washington state birth certificate, he’s named Timothy Leif Oshie but he is of Ojibwe lineage and has a tribal name, too — Keeway Gaaboo, which means coming home.