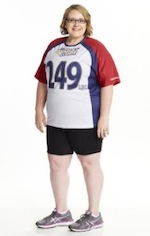 Season 15 of The Biggest Loser premiered on NBC on Tuesday, October 15. One of this season’s contestants, Marie Pearl, wants a baby so badly she’s willing to take the grueling challenge on TV for all the world to see. Marie’s doctor thinks conquering her excess weight may be the first step to conquering the infertility she’s been battling the last four years.

Weight issues have been a life-long concern for 30-year-old Marie, who begins the show weighing 249 pounds. She describes herself as “being blessed with many successes throughout my life” but infertility is “the one failure that has held (her) back from completely loving” herself.

Marie’s successes include a loving six-year marriage, advanced degrees in accounting from Missouri State University, and a satisfying job as senior staff accountant at a community college in Springfield, Missouri. Born in Iowa and raised in Ash Grove, Missouri, Marie doesn’t remember a time when weight control wasn’t a struggle for her. She says a lack of exercise, problems coping with stress, and bad eating habits led to excess pounds as she grew up the middle of three sisters and into adulthood. She’s turned to the popular reality TV show to lose weight and gain self-confidence, hoping to become the woman and mother she’s always dreamed of.

Marie and her husband have tried for four years to start a family without success. Her doctor feels excess weight is hindering conception but polycystic ovary syndrome (PCOS) compounds the problem.

Only 5 to 10 percent of all women of childbearing age (12 to 45 years old) have PCOS, a leading cause of subfertility in women. It is the most common problem of the endocrine system in women of reproductive age. Subfertility represents a diminished chance of getting pregnant, not an inability to do so as defined by infertility. Symptoms of PCOS include anovulation, amenorrhea, irregular menstruation, and ovulation-related fertility challenges. Insulin resistance, Type 2 diabetes, high cholesterol levels, and obesity are associated with PCOS, which is thought to be a genetic disorder.

A desire to start a family and be healthier are the primary reasons Marie cites for auditioning for The Biggest Loser, which airs on NBC affiliate stations across the nation on Tuesday evenings at 8:00 / 7:00 Central. She’s hoping to become more physically active after participating in the show, a lifestyle every new mother can appreciate. Tune in to cheer Marie onward to success and fulfillment of her dream of motherhood.