Woman Shares IVF Treatment with the World, On Live TV! 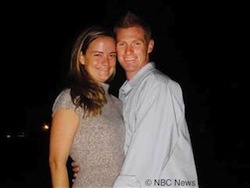 A woman made history on September 24, 2013, when she became the first to undergo in-vitro fertilization (IVF), on live television. Dr. Nancy Snyderman introduced Today show audiences to Jessica Menkhausen, 33, who was under anesthesia as doctors harvested her eggs. The NBC physician gave blow-by-blow details as ultrasound guided the hands of the surgical staff at St. Luke's Hospital, Missouri.

Dr. Snyderman stood at the anesthetized woman’s knee as she reported, "Right now Dr Sherman Silber is inserting a micro needle with a little suction into the ovary and each of these black sacks you see really houses an egg. They're being sucked out and being examined behind us.”

Viewers then learned how Menkhausen's eggs would be transported to a laboratory. Technicians there would then inject sperm from her fiancé, Derek Manion, into the woman’s eggs. If the procedure is successful and produces viable embryos, Menkhausen will return to the hospital on Friday so doctors can implant the fertilized eggs into her uterus.

Why Did She Have IVF on Live Television?
While thousands of women have had IVF treatments in hopes of becoming pregnant, Menkhausen is the first to do so on live television. She said she agreed to this because sharing her story helped her deal with her own fears head on. Menkhausen had plenty to fear – she had been battling infertility her entire life. She had debilitating menstrual symptoms when she was a teenager and suffered two ectopic pregnancies in her early twenties.

Success means the world to Menkhausen and her fiancé, and they are determined to have a successful IVF treatment the first time around. Each IVF cycle can cost $17,000 and the couple has spent their life savings for this round of treatment.

Menkhausen wrote: "So, despite the hormone roller coaster, bruising from injections, and the constant 'what-if' analysis going on in my head, I know that the first time I hear our baby cry, it will be well worth what we have gone through."