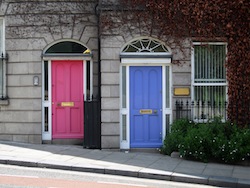 Ireland was neither for nor against the Nazis during World War II. It was this balance on neither side that partly kept the Jewish population to a minimum throughout the country. There is mention in the history of Ireland of some anti-Jewish speeches and government decisions which could also have helped keep the Jewish population low. As a standard, people admitted into Ireland during the years of World War II were looking to retire as independently wealthy residents with no intention in entering the workforce – these immigrants were often Roman Catholic. There is mention that Ireland was keeping Jewish immigration at a minimum to keep anti-Semitism from becoming a problem. Today, there are only about 2,000 Jewish people in Ireland.