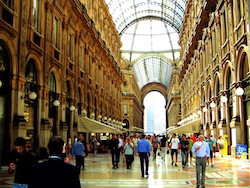 This recipe is a bit different from other Jewish Penicillin recipes as an Italian flare is added with oregano and Italian tomatoes. When cold in pregnancy is getting you down, this recipe may be just what you need.

The Jews in Italy have strong bi-cultural roots which go back even before the birth of Christ, when the Jews already had an alliance with the Roman Empire. Under the leadership of Judah Maccabeus, many Israelites left the land of Israel to go to the "Eternal City" (Rome) in the second century BCE. It was not until the Romans destroyed the second temple in Jerusalem [70 CE] that the Jewish/Roman alliance was broken and the Jews were forced into slavery. About ten thousand Jews were transported to Rome to be used as workhands to help build the Coliseum. This image of history was frozen in time and will be remembered forever thanks to the Arch of Titus, where the Roman victory over the Jews was etched in stone.

Variations: Any of the vegetables in this recipe for Jewish Penicillin can be removed or substituted as desired. Spinach is commonly replaced with escarole or kale. Orzo can be replaced with any small pasta, as needed.