Best Position to Get Pregnant

The missionary position is among the best sex positions to get pregnant faster. It is considered optimal for conception — though, of course, you can get pregnant having intercourse in almost any sex position.

The missionary position got its name because missionaries reportedly insisted that all other sex positions were sinful because sex only serves one purpose — to get pregnant — and that this face-to-face coital arrangement was the only acceptable way to get pregnant.

In the traditional missionary position, the woman lies on her back with her legs spread, both of her knees bent, and her feet firm on the bed. The man is on top facing her. There are additional variations on the basic missionary position; for example, the woman can raise one or both of her legs while the man holds them or places them on his shoulders, or she can extend her knees. 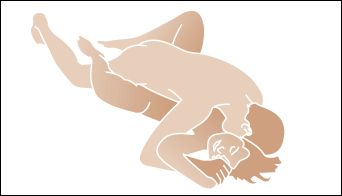 This position is the best sex position to get pregnant when it comes to conception because as the woman lies on her back, the vagina is tilted downwards toward the cervix; this makes it easier for the sperm to get through the cervix and into the uterus. Another benefit is that this position allows the penis to penetrate more deeply into the vagina, so sperm can enter the cervix more directly right after ejaculation.

Furthermore, the missionary position is very comfortable and allows for good body contact. Partners are facing each other and can kiss and hug while they're having intercourse. The woman is able to move relatively freely, and the man can keep some of his weight off of her body by lifting himself up with his hands or elevating his body using his knees.

If you are making love in the missionary position and want to further improve your chances of conceiving, take these steps after ejaculation:

It is normal for some of the ejaculates to flow out of the vagina when the woman gets up, and it won't lessen her chance of getting pregnant because at this point most sperm remaining in the vagina is no longer viable. For the same reason, staying on her back longer than 30 minutes won't improve a woman's chances of conception.

If you feel more adventurous, consider these other sex positions to get pregnant and enhance your conception chances:

Needless to say, whichever sex positions to get pregnant you use, don't make getting pregnant a chore: enjoy what you're doing!