Sign up for the waitlist for our new app, Obie!
Tools » Pregnancy Tools

This interactive labor curve and partogram and partograph allows you to enter labor cervical dilatation by time and graphically see whether labor is progressing normally or not. 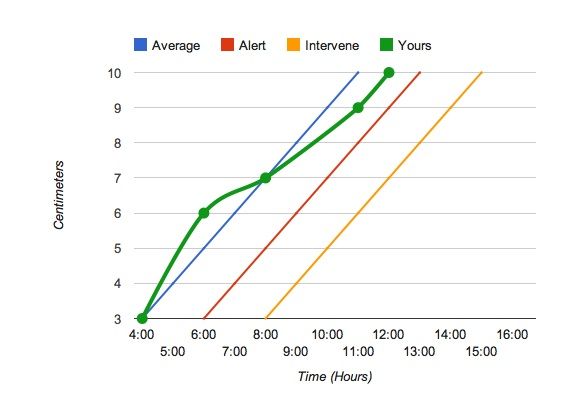 How labor is defined

The definition or clinical diagnosis of labor is a retrospective one. There is no laboratory test that gives a "labor titer" or an x-ray procedure that can define the difference between the laboring and non-laboring patient. Realizing these limitations, the patient is diagnosed as being in labor when a combination of conditions exist. Perhaps a good working definition may be stated as follows: When in the presence of perceived uterine contractions, there is progressive cervical dilation and descent of the presenting part which leads to the eventual expulsion of the products of conception, the patient is in labor.

The "mechanism of labor" refers to the sequencing of events related to posturing and positioning that allows the baby to find the "easiest way out." For the most part, the fetus is a passive respondent in the process of labor, while the mother provides the uterine forces and structural configuration of the passageway through which the passenger must travel. For a normal mechanism of labor to occur, both the fetal and maternal factors must be harmonious. An understanding of these factors is essential for the obstetrician to appropriately intervene if the mechanism deviates from the normal. The following definitions must be mastered to be able to discuss and understand the mechanism of labor:

The single most important determinant to the mechanism of labor is probably pelvic configuration. The classic work of Caldwell and Maloy is reviewed in the text and should be understood. Their classification of the pelvis into four major types (gynecoid, android, anthropoid, and platypelloid) helps the student understand the possible difficulties that may arise in a laboring patient. A quote that should be remembered is: "No two pelves are exactly the same, just as no two faces are the same. For each pelvis, there is an optimum mechanism that may be wholly different from the so-called normal mechanism described."

An important principle is that most pelves are not purely defined but occur in nature as mixed types. Regardless of the shape, the baby will be delivered if size and positioning remain compatible. The narrowest part of the fetus attempts to align itself with the narrowest pelvic dimension (e.g., biparietal to interspinous diameters) which means the occiput generally tends to rotate to the "most ample portion of the pelvis."

The mechanical steps the baby undergoes can be arbitrarily divided, and clinically they are usually broken down into six or eight steps for ease of discussion. It must be understood, however, that these are arbitrary distinctions in a natural continuum.

The following six divisions of labor are easy to use:

Abnormal mechanisms of labor do occur, and the operator must be able to recognize these early and intervene when appropriate. The above mechanisms of labor should become "second nature" to the practitioner and indeed does become such by careful observation. Those patients who have undeliverable or uncorrectable problems should be unhesitatingly delivered by the abdominal route because inappropriate operative vaginal intervention may lead to damage to both mother and fetus. Some of the undeliverable situations include persistent mentum posterior, persistent brow presentation, some types of breech presentations, and shoulder presentation.