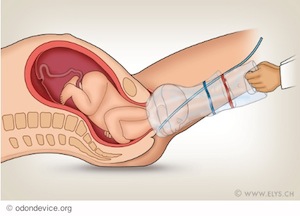 What do you get when you cross an auto mechanic, a YouTube video, and a vision in a dream? In the case of Argentinian mechanic Jorge Odón, you get the Odón Device.

The Odón Device is a simple, inexpensive, portable medical device that doctors and midwives can use to help extract a baby stuck in the birth canal in even the most remote locations far away from medical facilities. In traditional hospital settings everywhere, the device may eliminate the need for many risky emergency cesarean section deliveries.

Odón, 59, was intrigued by a video he saw on YouTube demonstrating how to extract a cork that had fallen into the wine bottle. A plastic grocery bag was inserted into the bottle and was inflated until it surrounded the cork. At that point, the cork could be drawn out of the bottle along with the bag.

Over dinner that night, he made a bet he could remove a cork from a wine bottle using only a plastic bag. He won.

At 4:00 AM that same night, he woke up after dreaming the cork trick could be used to extract babies having problems exiting the birth canal. Odón says his children were born with no such complications but his aunt had problems enough that she developed nerve damage as a result.

Mrs. Odón told her husband he was crazy and was soon asleep again.

The next morning, Odón rigged up a prototype device using a glass jar, a doll, a fabric bag, and a sleeve. He convinced a cousin to introduce him to an obstetrician friend. The doctor was impressed, providing Odón the encouragement he needed to advance his design.

Seven years later, one grateful mother said the device helped ease out the head of her nine-pound baby on the second push. This mother was one of 30 testing the device in a hospital in Argentina. Each of the mothers had normal labors and had had children before.

The World Health Organization (WHO) is expanding tests of the Odón Device. Additional testing will be done at Des Moines University. A syringe-making company based in Franklin Lakes, New Jersey - Becton, Dickinson and Company (BD) - will manufacture the device, which it expects to sell for about $50 with price breaks for impoverished countries.

According to WHO, 13.7 million births each year are threatened by serious complications. Almost 6 million babies are stillborn or die shortly after birth. As many as 260,000 women die giving birth. Obstructed labor is a major contributing factor in these deaths; it occurs when a baby’s head is too large or when difficult or prolonged labor causes so much exhaustion the mother’s body has no more strength to produce contractions.

In his dreams, Mr. Odón found a way to save some of these lives.