Smoking and the Fetus

Q: Does smoking harm the fetus? 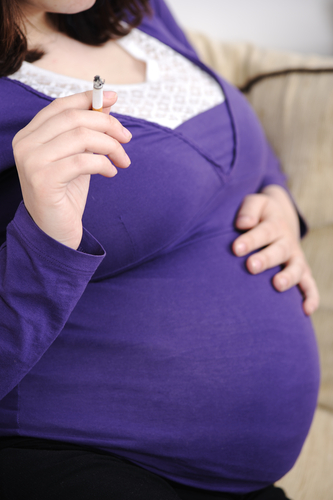 A: Yes, smoking does harm the fetus. Women who smoke during pregnancy have a higher rate of premature birth, miscarriage and low birth weight. Stopping smoking early in pregnancy is the best option, but women who stop smoking even a few months into pregnancy, reduce the risk of pregnancy complications.

A study performed in 1990, noted that 27% of all women who are able to have children choose to smoke. Of these women, only 27% quit smoking immediately after finding out they are pregnant. The other 73% choose to continue smoking or quit at a later time during the pregnancy.

Tobacco smoke is more than just smoke. It is a combination of more than 3,000 chemicals including nicotine and carbon monoxide. In high doses, carbon monoxide causes death due to the replacement of oxygen in the air. This relates to the fetus, because cigarette smoke decreases the amount of oxygen passed to the fetus through maternal blood. Babies in utero also feel the direct effects of nicotine and can become addicted to the drug. Just as it is hard to quit for mom, baby is born with an addiction to a drug that is instantly taken away.

Smoking during pregnancy is related to smaller babies and earlier births. According to clinical studies, a baby born to a mother who smokes during pregnancy weighs 250 grams less than other average sized newborns. While this may not seem like a lot of weight, if the baby is born premature, that 250 grams could be the difference between a healthy baby and a baby needed additional care in the Neonatal Intensive Care Unit.
Other effects of cigarette smoke on the fetus can include asthma, attention deficit disorder, behavioral problems and even hearing problems leading to learning disorders and speech problems.