Follow us on Instagram
Our app takes the guesswork out of getting pregnant. Get Obie for iOS Now!
Pregnancy » Laboratory Tests

Blood types are genetic traits, they are inherited from one's parents. Blood types are determined by the presence or absence of substances on red cells that can trigger an immune response also known as antigens. These antigens are triggered if they are foreign to the body. Blood types play a major role in inheritance, they can affect one's body, immune system, and other important physical aspects. Since some antigens can trigger a patient's immune system to attack the transfused blood, safe blood transfusions depend on careful blood typing and cross-matching. Do you know what blood type is safe for you if you need a transfusion? There are four major blood groups determined by the presence or absence of two antigens – A and B – on the surface of red blood cells. In addition to the A and B antigens, there is a protein called the Rh factor, which can be either present (+) or absent (–), creating the 8 most common blood types (A+, A-, B+, B-, O+, O-, AB+, AB-).

At your first prenatal visit, your doctor will do several blood tests including a test check your blood type, whether it's type O, A, B, or AB, and your Rh status, whether it's Rh-negative or Rh-positive.

There are 4 blood types, O, A, B, and AB, and each blood type can be Rh-positive or Rh-negative.

Early in pregnancy, a mother's blood will be tested to determine the blood type Rh status - that is, whether she has the Rh (Rhesus) factor, in which case she is Rh-positive. (About 85 percent of Caucasians are Rh-positive, as are 90 to 95 percent of African Americans and 98 to 99 percent of Asian Americans). If you don't have it, you're Rh-negative, and you'll need to take certain precautions during your pregnancy.

If a pregnant woman is Rh-negative, then there is a chance she might get sensitized during pregnancy or delivery, which could be a problem in the next pregnancy. Women who are Rh-sensitized can create antibodies that could conceivably cross the placenta and attack the fetus' red cells. 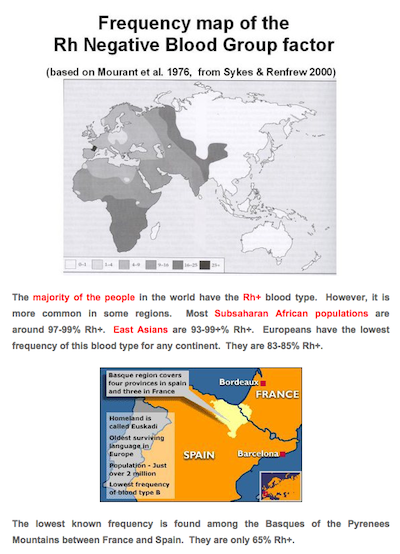 To prevent Rh-sensitization, pregnant Rh-negative women get a shot of Rh immunoglobulin at least once during the pregnancy, as well as after delivery if the baby turns out to be Rh-positive.

This shot will protect the mother from developing antibodies that could be dangerous during this pregnancy or in future pregnancies. If the baby's father is also Rh-negative, then the baby will be Rh-negative too, and no shot is needed.

Learn why your Rh factor is so important!

If you're Rh-negative and you've been pregnant before but didn't get this shot, another routine prenatal blood test will tell you whether you already have the antibodies that attack Rh-positive blood.

You could also have these antibodies under the following circumstances:

If there are antibodies, then it's too late to get the shot, and if the baby is Rh-positive, he's likely to have some problems. If you don't have the antibodies, then the shot will protect you from developing them.