Anna Pavlovna Matveyevna was born several weeks early in St. Petersburg, Russia, on January 31, 1881, to a laundry-maid mother and an unknown father. The baby is said to have been so puny and weak, her baptism was rushed forward to just three days after her birth. Anna survived, however, and became one of the most famous women in the world and one of the most celebrated ballerinas of all time.

By some accounts, her father died when she was 2. Others say her father was Russian speculator and banker, Lazar Polyakov, known as the Rothschild of Moscow in his day. When little Anna was 3, her mother married Matvey Pavlov, who adopted Anna and gave her his last name. 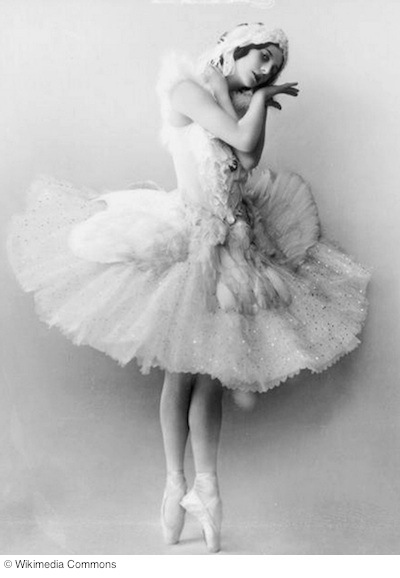 When she was 8, Anna’s mother took her to see a ballet production of The Sleeping Beauty, choreographed by Marius Petipa. The experience gave direction Anna’s life: she became determined to become a ballerina.

The next year, she applied to Petipa’s ballet school but was declined because the willowy child appeared too frail and delicate for such a physically demanding art form. Ballerinas at that time were sturdy and compactly built; Anna was not.

Perseverance paid off; she was accepted to the school at age 10. Her delicate physique required extra work on her part but she worked at every step until she mastered it flawlessly.

Her classmates called her “the broom.” Her unique style combined classic moves of the past with modern moves of the moment, earning her the nickname “the little savage.” Competing ballerinas thought of her as technically inferior because of her thin ankles and long legs.

After graduation at 18, she worked her way through the ranks of Petipa’s ballet company, earning the rank of prima ballerina at age 25. While she experimented with an aggressive acrobatic style, Petipa encouraged her to use her greatest assets: her fragility and daintiness.

Pavlova’s most famous role was the solo performance of The Dying Swan, choreographed just for her. Swans became a favorite theme of her life.

While on tour in The Hague, Netherlands, Pavlova was diagnosed with pneumonia that required surgery. The surgery meant the end of her dancing so she refused it. “If I can’t dance then I’d rather be dead,” she said.

The greatest ballerina in the world died of pleurisy on January 23, 1931. Her last words were, “Get my ‘Swan’ costume ready.”