When he was born on July 26, 1979, at 25 weeks, Derek Paravicini was given oxygen therapy, as is standard procedure for preemies in neonatal intensive care units (NICU). The oxygen is said to have caused blindness and severe learning disabilities. Paravicini is severely autistic, too.

Paravicini, now 34, is also a musical prodigious savant, a term that describes a mentally challenged individual who demonstrates musical skills remarkably greater than those of a prodigy or of someone his own age who has been highly trained. Beginning at age 2, Paravicini was able to recreate any piece of music after hearing it just once; his pitch is said to be perfect. 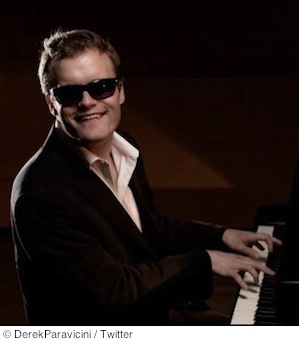 Diana, Princess of Wales, presented Paravicini with the Barnardo's Children's Champion Award for musical performance when he was 7 and again at 9.

Paravicini, who lives in London, has been featured on several television and radio shows in Britain and the United States:

Paravicini made legal history in 2010 when the United Kingdom's Court of Protection granted his parents the right to manage his commercial and personal affairs. Until Paravicini's case, guardianship of an adult incapable of taking care of himself had always been granted to the Official Solicitor of the Ministry of Justice.

Paravicini's parents — Nicolas Paravicini and Mary Ann Parker Bowles — were divorced at the time of the guardianship ruling. His mother was once sister-in-law of Camilla, Duchess of Cornwall, during the Duchess's first marriage. The author, William Somerset Maugham, is Paravicini's great-grandfather.