What Is Conception? How Does Pregnancy Happen?

Controversy about the word conception

There is some controversy about the term 'conception'. Scientists, notably the American College of Obstetricians and Gynecologists (ACOG), agree that the establishment of pregnancy takes several days and is not completed until the blastocyst or embryo is implanted in the lining of the woman's uterus. According to ACOG, the term "conception" properly means implantation. A pregnancy is considered to be established only after the egg has been fertilized, the embryo has moved down the fallopian tube, and when the process of implantation is complete. Therefore, scientifically speaking, a pregnancy begins with implantation of the embryo, about 9-10 days on average after fertilization, after the egg has been fertilized by the sperm, and with the embryo implanting into the uterine lining.

Others, notably those who are opposed to abortion, believe that conception begins at fertilization, on the day when ovulation happens and when the egg is fertilized by sperm.

It is best not to use "conception"

Whenever there are different interpretations for the same word like conception, it's best to not use it but instead use descriptions and words that all agree on. On this page, we describe the important steps of getting pregnant, fertilization, and implantation.

There are several parts involved in getting pregnant: 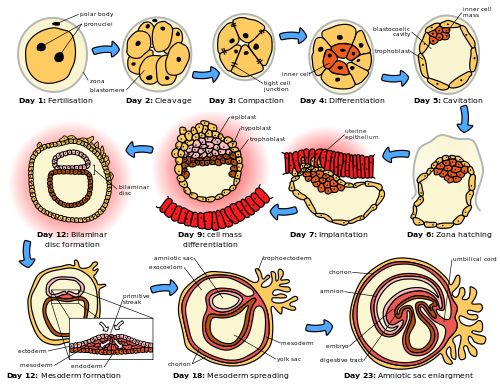 Hormonal changes prior to ovulation

Each month shortly after your menstrual period ends there are certain hormonal changes in a woman's body that stimulate one or more eggs in the ovaries to mature. These hormones also affect the uterine lining to prepare it for implantation

The hormonal changes cumulate in ovulation when one or more of the eggs erupts from the follicle inside the ovary. Ovulation usually happens about two weeks before your next period.

The egg travels towards the fallopian tube

After the egg is released, it is picked up by the "fimbriae" of the fallopian tube and moves into the fallopian tube. It is there that a sperm (if present from sex within the prior 5-6 days) reaches the egg and fertilizes it. If no sperm is around to fertilize the egg, then the egg moves to and through the uterus and disintegrates and a menstrual period happens.

If sperm does make its way into the Fallopian tube, moves up towards the eggs, reaches the egg, it can then burrow into the egg. That is also known as fertilization.  When the egg is fertilized by the sperm, the baby's genes and sex are set. If the sperm has a Y chromosome, your baby will be a boy. If it has an X chromosome, the baby will be a girl.

Travel through the fallopian tube after fertilization

Implantation inside the uterus

Some women notice spotting (or slight bleeding) for a very short time around the time of implantation. The lining of the uterus gets thicker and the cervix is sealed by a plug of mucus. It will stay in place until the baby is ready to be born.

Human chorionic gonadotrophin (hCG) is a pregnancy hormone present in your blood from the time of conception; it is produced by the cells that form the placenta. This is the hormone detected in a pregnancy test, but usually, it takes three to four weeks from the first day of your last period for the levels of hCG to be high enough to be detected by pregnancy tests.