What Is Your Fertility Stage?

What is STRAW or stages of the reproductive aging workshop?

In 2001, and again in 2011, researchers met to define a nomenclature and a staging system for ovarian aging including menstrual and qualitative hormonal criteria to define each stage. The initial number of stages in 2001 was seven, while in 2011, there were 10 stages.

What determines my fertility stage?

Your fertility stage is determined by the following:

The staging system developed at the Workshop in 2011 had ten stages and is based on your menstrual cycle regularity: four are the "reproductive" stages, two are menopausal transitions, and 4 are postmenopausal.

We’ve long been aware that “fertility” is not a static state, but rather an ever-evolving continuum along which all women travel. We intuitively know that a 20-year old woman may have a very different trying-to-conceive experience than a 45-year old woman – even if we’re not aware of all the factors that contribute to declining fertility. Your fertility status, in general, is defined by your age, but there is a wide range of ages within each stage. For example, a 38-year-old woman may be in her peak reproductive state or she may already be in early menopause.

This stage encompasses women from puberty up to age 20 (approximately). In the Early Reproductive Stage, key hormone levels (such as FSH/estrogen) are normal. Because the cycles of women in this stage may not yet have fallen into the traditional 28-31 day pattern, fertility may be compromised accordingly.

This is a long and highly relevant stage in a woman’s fertile life. It is a woman’s most fertile stage and encompasses women from ages 20 to 35, approximately. For this group, again, key reproductive hormones (such as FSH and estrogen) tend to be within the normal range. Additionally, menstrual cycles have “locked” into that regular pattern that tends to be conducive to achieving pregnancy.

The late reproductive stage includes women of age 35 to 42, approximately. Here, we see FSH levels begin to creep up, an indication of impending menopause. Even so, most women in this stage still ovulate and have a regular cycle. Women with an irregular cycle in this stage may find that taking a Vitex Agnus Castus-containing fertility supplement, such as FertilAid for Women, helps to get ovulation and fertility on track.

The early perimenopausal stage consists of women approximately 42 to 46 years of age. Here, we tend to see significantly higher FSH levels (around the 30 mIU/mL range), and a pronounced decrease in estrogen as a function of lower follicle quantity and quality. The menstrual cycle tends to shorten in this stage as well. These hormonal and cycle-related factors combine to make achieving conception more difficult than in earlier stages.

This stage consists of women approximately 46 to 50 years of age. Here, FSH levels tend to be elevated beyond any of the earlier stages (in the 50 mIU/mL range). The menstrual cycle continues to lose regularity and become more sporadic. Achieving pregnancy – and maintaining it – is more difficult than in earlier stages; around 50% of pregnancies in women over 45 end in miscarriage.

Consisting of women approximately 50-55 years of age it is the time period for 5 years after the last menstrual period. This stage is characterized by peak FSH levels and dramatically reduced estrogen production. The menstrual cycle, once absent for a fully year, helps to define this stage. Options for achieving pregnancy after the onset of menopause typically require medical intervention in the form of in-vitro fertilization (IVF).

Consisting of women approximately 55 years of age and more. This is the time period which begins 5 years after the last menstrual period, the true ‘Post Menopause”
These STRAW stages are not inflexible. And some women will progress from one stage to the next, while others will go up and down the stages, and while still others may skip a stage altogether.

1. Stay at your optimum weight (BMI 19.5 to 25)
2. Don’t smoke
3. Don’t drink alcohol excessively and stop drinking before trying to conceive.
4. Eat a well-balanced diet and exercise
5. See your doctor for preconception counseling
6. At least 2-3 months before actively trying to conceive women should take a vitamin and fertility supplement like Fertilaid. Fertilaid for women includes all essential vitamins, folic acid, as well as Vitex Agnus Castus which are designed to improve her fertility and improve chances for a healthy pregnancy
7. It takes three months for sperm to be produced. He should take Fertilaid for men to improve his sperm health. 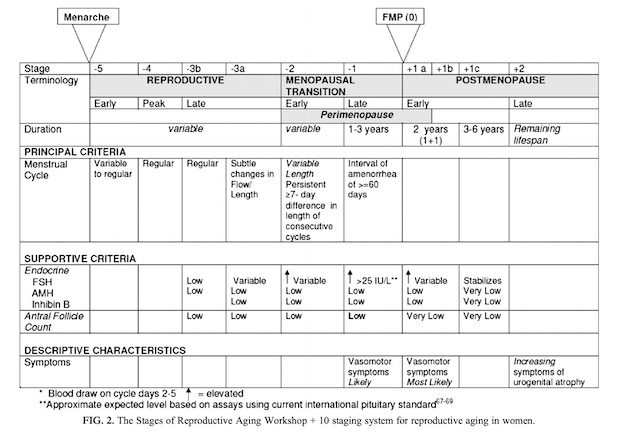