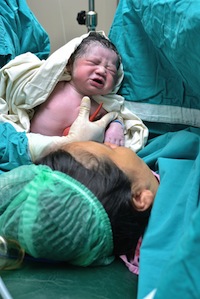 A topic I see discussed online quite a lot is that of HBAC, which stands for home birth after cesarean... in other words: an attempted vaginal birth after cesarean (VBAC) taking place at home. Is HBAC a safe option? That depends. “Safe” is a subjective term – what may seem reasonably safe to one person may sound outrageously dangerous to another. So let’s look at a few important points (numbered below) about HBAC and VBAC… and from there, you decide what you think as far as safety.

Let's lay out the acronyms again quickly so there is no confusion:
VBAC = a vaginal birth for a woman with one or more previous cesarean sections
HBAC = a VBAC which takes place at home with a midwife

To quote the Guise study: "As stated in a prior VBAC evidence report, and echoed in studies contained in this report, there is no single sign for the occurrence of uterine rupture; however, fetal heart tracing abnormalities, particularly fetal bradycardia (reported in 33 to 100 percent of all studies) is the most frequently reported sign of uterine rupture. Other signs reported in uterine rupture studies in descending order are maternal vaginal bleeding, maternal pain, and uterine contraction disturbances."

For a woman attempting HBAC, electronic fetal monitoring is not an option. A handheld Doppler or fetoscope is not the same.

Transfer time is therefore critically important to consider for mothers attempting HBAC (which is true for any woman attempting a birth in an out-of-hospital setting). Also consider that a hospital must do its own monitoring/assessment before performing a cesarean section. Getting dressed, out of the house and into a car (or waiting for an ambulance), travel time (traffic considerations where applicable), and hospital protocol will all affect how long it can take a mother to have a cesarean section. If you've ever been a part of a home birth transfer (I have), then you know that having a cesarean section in under 18 minutes is incredibly unlikely.

We have two studies in the USA that have information collected on out-of-hospital, midwife-attended VBACs: the Lieberman study (freestanding birth centers) and the MANA study (home birth). In both cases, their outcomes were identical and significantly higher than hospital outcomes. Here are the outcomes (intrapartum mortality + neonatal mortality):

The risk of death of a baby for attempted HBAC compared to attempted VBACs in a hospital is substantially higher.

Sample size is an issue here. Because the Lieberman study looks at 1453 birth center VBACs and the MANA study looks at 1052 HBACs, we cannot be certain of the exact mortality rate for an out-of-hospital setting. However, statistical power comes into play here, which is affected by various factors - an important factor being the magnitude of the effect. Since the effect in this case is so large (a nearly 4-fold increase in mortality rate), the smaller sample sizes are adequate enough to be certain that VBAC attempted out-of-hospital substantially increases the risk of infant death.

4. Other risks with HBAC:

A woman attempting HBAC does not only face risk of uterine rupture; rather, uterine rupture is an additional risk for her to consider. Childbirth is risky business, period. For any woman, giving birth in any setting, regardless of mode of delivery, regardless of birth attendant, regardless of medical interventions, there are risks inherently involved with childbirth. There will be a certain amount of deaths that occur in all birth settings.

Women also need to consider risks of home birth. Home birth here in the USA is far riskier than hospital birth. Not a single study done on home birth here in the USA supports home birth as an equally safe option to hospital birth -- not even the MANA study, not even for low risk women. There is also the 2014 Cornell study, the 2013 Grunebaum study, the 2013 Cheng study and the CPM2000 study. Each of these studies addresses planned, midwife-attended home births in the USA. Each shows a dramatic increased risk for home birth. Home birth in the USA is not like home birth in any other first world country. Different system, different midwives.

Other studies have also looked at the risk of placental abruption and placenta previa for women with a previous cesarean section. As discussed in the Lieberman study and here in this 2009 study by Yang et al, women with a previous cesarean section are at an increased risk for placental abruption and placenta praevia. These are life-threatening complications that require immediate medical help.

It is sometimes pointed out that not all ruptures are “catastrophic.” This is a term that is a little confusing. If a rupture is “catastrophic,” that means serious morbidity or death of the newborn has occurred. Catastrophic does not refer to the size of the rupture. It refers to the outcome of the rupture.

What else is there to consider?

In the Netherlands, where home birth is very popular, having a previous cesarean section risks a woman out of the option to have a home birth (in other words, HBAC is not an option). In that country, women with a history of cesarean section are referred to OB care in a hospital.

Since there are many hospitals in the USA that have banned VBACs due to lack of access to around-the-clock emergency care, some women feel forced to choose between attempting HBAC or having a repeat cesarean against their will. This an incredibly unfortunate situation. On the one hand, I understand why bans are put in place to help prevent life-threatening emergency situations that cannot be dealt with in a timely matter; on the other hand, I feel it lacks respect of a woman’s autonomy and right to choose. It is worth noting that lack of resources is the main reason for bans… resources which would not be available at all if a woman is at home.

What are your thoughts on HBAC? Sound off in the comments!

Please note: all references and definitions are linked within this piece. Click on the bold blue links to look at a specific reference or definition; links underlined twice are advertisements.