Homebirth Hasn't Been Safe for a Long Time

I am a mom and a physicist, and at one time I attempted to give birth at a birth center. But I wouldn’t make that choice again, because I’ve since learned about the risks to my baby.

Midwives must convince women to suspend common sense and put their babies’ lives and brain function at risk unnecessarily, by getting them to choose homebirth.

There is nothing more important to me than the life and healthy brain function of my baby.

Mortality rates shown in the plot below come from the CDC Wonder Website, where Vital Statistics data is available to the public. Birth center and homebirth mortality rates are combined because these birth settings cannot be separated on the Wonder Website. 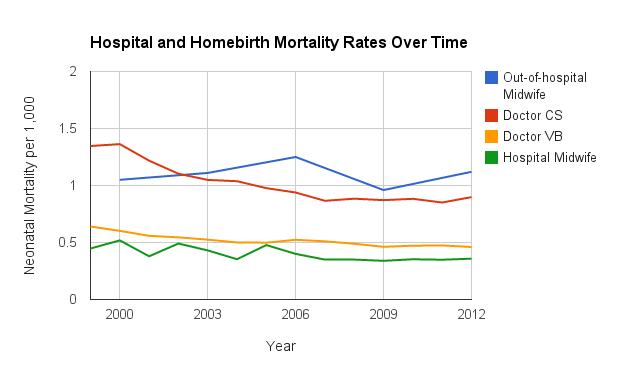 As often happens with matters of settled science, there is a group selling an alternate version of reality. In this case, sadly, it’s midwives.

The Midwives Alliance of North America (or MANA), the professional organization of homebirth midwives, has lied, saying that homebirth is safe, even though the mortality rates they published show the opposite. MANA did not even include hospital mortality rates for comparison (gee, I wonder why), but they stamped “safe” on the results anyway. MANA is clearly lying to con women and continue making a living attending homebirths.

Homebirth should be a dying industry, and to keep it going, midwives must convince women to suspend common sense and put their babies’ lives and brain function at risk unnecessarily, by getting them to choose homebirth. Claiming homebirth is safe defies the very spirit of informed consent. Truthfully, homebirth hasn’t been safe for a long time.

EDIT: See a continued discussion of these statistics at my next post, "Safer Home Birth Requires Educated, Regulated Midwives."

Keyword Tags:
Homebirth
Midwives
Previous: Who Will Be Involved In My Care on Labor & Delivery?
Next: To Vax or Not to Vax: that is the Question