With almost 80% of new cancer cases being invasive ductal carcinomas, it is the most common form of breast cancer. Invasive ductal carcinoma (IDC) is also sometimes referred to as infiltrating ductal carcinoma, but can also be referred to as carcinoma not otherwise specified (NOS) or carcinoma of no special type (NST). Invasive refers the nature of this type of cancer, which invades the breast tissue surrounding the affected area through a spreading of cancerous cells. Ductal identifies the area of origination for the cancer cells, which is the tubes that carry the milk from the lobules that produce the milk to the nipple, where the milk is excreted from the body. These tubes are called milk ducts. Carcinomas are cancers that originate in breast tissue or other tissues or skin that cover internal organs. When you combine these three terms, the result is a description of a cancer that began in the milk ducts, has penetrated the wall of the milk duct, and began invade the tissues that comprise the breast. It is possible for IDC to spread to other areas of the body, including lymph nodes, over the passing of time. This spreading of cancer cells throughout the body is called metastasizing or metastases. The earlier IDC is treated, the lower the risk of the cancer spreading through the bloodstream to other areas of the body or the lymphatic system. 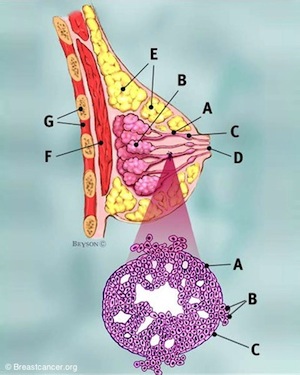 The American Cancer Society shares that, in the United States, of the more than 180,000 diagnoses of invasive breast cancers diagnosed in women each year, the majority of these cases are IDC. The risk of breast cancer increases once a woman reaches 45 years of age. This form of cancer most commonly affects women over 55 years of age; however, the remaining one-third of cases are younger women and men, who are not immune from this type of cancer. As a matter of fact, 90% of males with breast cancer have IDC.

Initially, IDC is primarily asymptomatic, with the initial signs that something is wrong presenting themselves in the form of an abnormal area being identified during a screening mammogram. This abnormality is then tested further for identification. Some cases, on the other hand, are first identified as a new mass or lump inside the breast that can be felt during a self-breast exam or breast exam by a doctor. This is why self-exams are so important.

The American Cancer Society lists a number of symptoms of breast cancer, which includes IDC. These symptoms are:

The risk factors for IDC include daily alcohol consumption greater than three drinks, having their first child after 30 years of age or no children at all, and early menstruation. A family history of breast cancer can be a contributor; however, less than 10% of affected women have this family history.