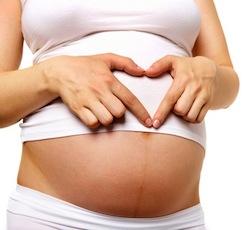 Your heart changes with your Pregnancy

The following changes with the circulatory system during pregnancy happen week by week as early as the very first pregnancy week:

The increase in blood volume, as much as 45%, allows adequate blood to be transported to the uterus for proper development of the fetus.

Heart rate increases during pregnancy; there is as much as a 20% increase in heart rate during the second and third trimesters; early on there is an increase of around 7 beats per minute, later the increases reaches up to a 15 beat per minute increase.

The knowledge of the cardiovascular adaptations is especially important when dealing with body position during exercise. The supine position should be avoided after the first trimester; this position results in a relative obstruction of venous return and therefore a decrease in cardiac output. Additionally, continuous motionless standing should be avoided; motionless standing results in blood remaining in the legs, resulting in a lower blood pressure and a significant decrease in cardiac output.

These body changes during pregnancy are important to understand and keep in mind during exercise prescription design as well as daily living. A pregnant women should avoid standing for extended periods during exercise, leisure, as well as on the job.