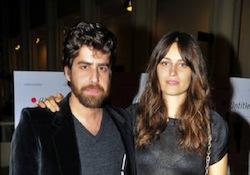 Most parents-to-be are overjoyed at the prospect of welcoming a child into the world. Along with the joy, however, the reality that pregnancy and childbirth are precarious episodes of life is never too far out of mind. Television and film actor Adam Goldberg and his long-time love, the graphic artist Roxanne Daner, experienced the joy and the heartbreak after their first child was stillborn in 2013.

Goldberg recently revealed the couple is expecting again but they are doing their best to keep the pregnancy private. Their hope for parenthood is tempered with tragic memories of stillbirth, an event they rarely mention in public.

Goldberg, currently enjoying a recurring role on the hit TV series, Fargo, publicly acknowledged the pregnancy during a December 18 interview on WTF Podcast with Marc Maron. He said the couple’s original plan was to keep the pregnancy a secret but his girlfriend’s “gigantic” baby bump eventually gave their secret away. The bump first caught the public eye as Daner and Goldberg strolled the red carpet on their way to the 66th Emmy Awards presentation in August. They expect a child sometime in 2015.

During the interview, Goldberg, 44, bared one of his most intimate secrets: the stillbirth of a child about a year and a half ago. “I’ve talked about it but not really in a public fashion,” said Goldberg. He describes the stillbirth as “totally awful, especially because I had been ambivalent about having children.”

Goldberg said it was four days after the pregnancy due date when the stillbirth occurred. He describes it as “horrifying” and “my worst fear.” He also said that, while he and Daner anxiously await the arrival of their child in the coming months, they also fear what might happen again. He described the couple’s emotional state as “both freaked out, it’s just not fun.”

Goldberg landed his breakthrough role in 1992’s film, Mr. Saturday Night, which starred Billy Crystal, who was also debuting as director of the movie. Other film credits include Saving Private Ryan, Dazed and Confused, How to Lose a Guy in 10 Days, 2 Days in Paris, and The Unusuals.

Goldberg’s TV credits include a recurring role as Chandler’s crazy roommate during Season 2 of Friends and as Joey’s high school buddy in the spin-off series, Joey. Additional TV appearances include ER, NYPD Blue, Will & Grace, and My Name is Earl.

Daner, a native of New York, is an accomplished violinist as well as an illustrator and graphic designer now based in Los Angeles, where the couple lives. She founded her design firm, Ludlow Kingsley, in 2006 with business partner Clark Stiles. Daner and Goldberg frequently perform together in Goldberg’s band, The Goldberg Sisters.

In addition to his work in film, TV, and music, Goldberg is a professional photographer who often features photos of Daner on his personal website, where he includes Lamaze coach and purveyor of fine meats among his many talents. Fans are undoubtedly awaiting photos of the couple’s new baby in the near future.