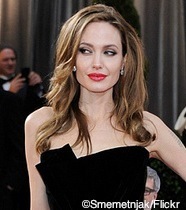 The name Angelina Jolie has dominated the pages of magazine and newspaper articles for years. From tumultuous relationships with Hollywood men to her estrangement from father Jon Voight, Jolie has managed to keep journalists on the edge of their seats for over a decade. The most recent story about the actress and activist, however, is nothing like any we've ever read. After watching her mother battle cancer for nearly 10 years, Jolie chose to reduce her risk of facing the same fate, by getting an elective double mastectomy. She wrote about her choice in an op-ed piece in the New York Times, titled "My Medical Choice," published on May 14th, 2013.

Jolie began her preventative battle against breast cancer with a simple test for a defect in her BRCA1 gene. Based on the test results and other factors, her doctor suggested she had an 87% risk of developing breast cancer and 50% risk of developing ovarian cancer. After watching her mother fight ovarian cancer and fending off questions from her children about her risk of getting cancer too, Jolie decided to be proactive and began by reducing her risk of breast cancer with a double mastectomy.

She started treatment in February 2013 with a process known as “nipple delay.” The process tests breast ducts for cancer and pulls blood into the tissue to help doctors preserve the nipples when the mastectomy is completed. Just two weeks after the “nipple delay” procedure, both of Jolie’s breasts were removed and expanders were inserted to help stretch the remaining tissue to accommodate implants. She healed for several weeks before the implants were inserted and just nine weeks after the first procedure, Jolie has reduced her risk of breast cancer to just 5%.

Though Jolie is healed and ready to continue life as normal, her preventative journey may not yet be complete. According to an Op-Ed piece she wrote for the New York Times, ovarian surgery may be in the future. “My doctors estimated that I had…a 50 percent risk of ovarian cancer. Once I knew that this was my reality, I decided to be proactive and to minimize the risk as much as I could,” she wrote. “I started with the breasts, as my risk of breast cancer is higher than my risk of ovarian cancer.” This statement alludes to the fact that she may undergo further surgery in the future in order to also reduce her risk of ovarian cancer, which cause her mother's death at the age of 56.

Jolie kept the entire ordeal private until the surgical and healing processes were complete, but she chose to step out into the spotlight in hopes of encouraging women to make the best decision for them, including gene testing. Jolie wrote, “Life comes with many challenges. The ones that should not scare us are the ones we can take on and take control of.”