Stefani, in her early 40s (sources vary as to her exact age), said she “really, really, really wanted (a baby) about two years ago” but “it didn’t really work out.” She also hoped for a girl this time but she’s “#suroundedbyboys,” as she tweeted to her fans in January. 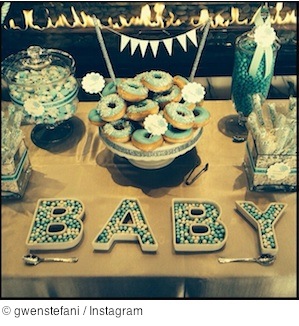 The story behind baby Apollo’s first name hasn’t been revealed but proud papa Rossdale, 48, also a fan of Twitter, revealed son #3 is named after his grandmothers. In his public announcement of the new baby’s name, Rossdale tweeted, “Bowie and Flynn = mothers’ maiden names.” Stefani’s mother, Patti Flynn Stefani, gave up life as an accountant to build a family with her husband, Dennis Stefani, a marketing executive for Yamaha. Rossdale’s mom, Barbara Stephan Bowie Rossdale, divorced Rossdale’s doctor dad, Douglas, when Rossdale was 11.

Stephani, songstress and founding member of the award-winning ska punk band, No Doubt, met Rossdale, also a musician, in 1995. No Doubt and the Goo Goo Dolls were the opening acts for a tour for Rossdale’s band, Bush, an alternative rock band for which he was lead singer and rhythm guitarist.

The couple were married twice in 2002. The first wedding ceremony took place at St. Paul’s Church in Covent Garden, London. The second ceremony took place two weeks later in Los Angeles, California. Rossdale was born in London, where his musical career is based. Stephani is a California girl who wanted to wear two times the elegant one-of-a-kind white-and-pink wedding gown that haute couture fashion designer John Galliano of Dior designed especially for her. The couple has homes in the Primrose Hill section of London and in Los Angeles.

Fashion design is important to Stefani, who made most of the clothing she wore during stage performances with No Doubt and other acts. The women of her family are noted seamstresses who, along with Stefani’s mother, made most of the clothing Stefani wore while growing up. Her love of designing her own clothing evolved from her on-stage wardrobe to a line of clothing -- L.A.M.B. -- named after her first solo album, Love. Angel. Music. Baby.

In addition to her music and fashion careers, Stephani has added fragrances to her L.A.M.B. product line of clothing and accessories, she is a spokesperson for L’Oreal Paris, and has delivered noteworthy performances in several movies. The singer is deeply involved in philanthropy, too.

In spite of their high profiles on worldwide stages, Rossdale said in a 2005 radio interview that he and Stefani make efforts to keep their personal relationship out of the spotlight. Rossdale grew up in a home described as chaotic and he strives to provide a more stable home environment for his family.