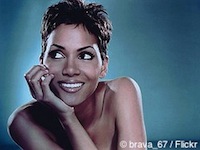 When Halle Berry met Canadian model Gabriel Aubry she had no idea the next eight years would consist of the best times and the worst times. During her five year relationship with Aubry, Berry gave birth to her first child, Nahla. The couple's rocky relationship ended in 2010 and a custody and child support battle began. Due to Berry’s financial situation, she was ordered to pay child support in the sum of $20,000 a month to Aubry, who shared custody of daughter Nahla. To make matters worse, emotions sparked when Berry began dating and eventually became engaged to French actor, Olivier Martinez. After multiple reports of physical violence, restraining orders and much court and media attention, Berry now faces a new challenge, pregnancy at 46.

Though details of the pregnancy remain vague, Berry claims she was surprised by the news. According to reports, she thought she was passed the point of being able to conceive and there has been no mention of Berry using fertility treatments. Nahla, Berry’s five-year-old daughter, has reportedly been asking Berry for a sister for quite a while. According to reports, Berry told her daughter that they would have to keep asking God for the gift. Though the media is leaning towards a brother for Nahla, Berry claims she does not know the sex of the baby.

For Berry's first pregnancy (with Gabriel Aubry), fertility drugs (and possibly other treatments) were used to aid conception. Though no claims of fertility treatments have surfaced regarding her current pregnancy, Berry will likely be the subject of much gossip since the chances of conceiving naturally at age 46 are slim (and even more so with a history of fertility issues). However, Berry now has only one thing on her mind- being the best mother she can be.

According to interviews with Berry about Nahla and pregnancy, Halle has said she thinks Mother Nature has the wrong idea. Berry believes women should have difficulty conceiving in their 20s, when they are typically not as emotionally prepared for motherhood, instead of in their 30s and 40s when they are more mature.

Fertility treatments or not, Berry and Martinez are thrilled to be expecting. This is the first child for Martinez, a 47-year-old actor, best known for his role in Unfaithful. The couple plans to move to France sometime in the future, though news reports currently predict that they'll have to wait until Nahla turns 18 or the bitter custody battle with Aubry ends.

Congratulations to Halle and Olivier!