Pregnancy Guide For Women 35 and Older

Doctors use a woman's age of 35 and older as one of the key points in determining whether or not she will need advanced medical care during pregnancy due to a potential increase in pregnancy risk. Most women over the age of 35 do not have complicated pregnancies, but doctors remain on high alert throughout the pregnancy, just in case. The key to a healthy pregnancy at any age starts with learning all you can about prenatal and pregnancy care — from preconception to postpartum. Here's how to get started!

Pregnancy at 35 and over 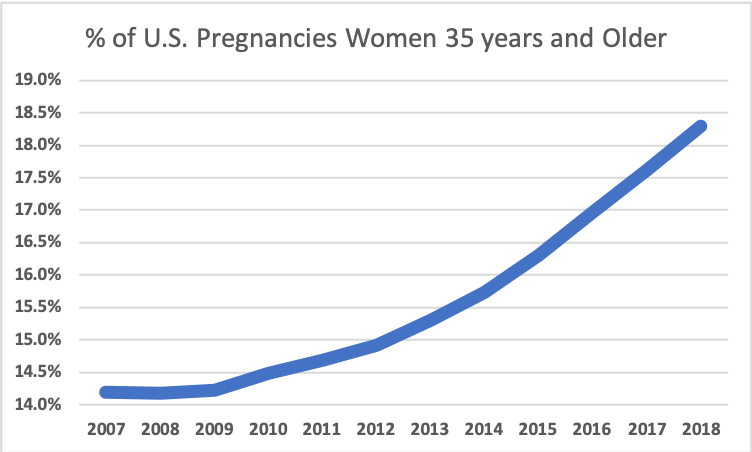 What are some health risks with advanced maternal age?

As women age, they are more likely to suffer from diseases and conditions associated with aging, such as miscarriage, diabetes, high blood pressure, and arthritis. Some of these conditions and the age of the body, in general, may increase the risk of gestational diabetes, pregnancy-induced hypertension, and premature labor.

Is there an increased risk of having fraternal twins?

With advanced maternal age comes an increased chance of fraternal twin pregnancy. In addition to age, the number of pregnancies also comes into play. For example, if a woman over 35 becomes pregnant and has had four pregnancies prior to the current pregnancy, she is three times more likely to conceive fraternal twins.

Birth Rates at Their Lowest in 32 Years!

Can preterm birth be a possibility?

Several studies have shown a relationship between preterm birth (PTB) and advanced maternal age. In a large retrospective, Canadian study women over 40 years of age had increased risk factors for PTB such as chronic hypertension, use of assisted reproductive technology (ART), pre-gestational and gestational diabetes, invasive procedures during pregnancy, and placenta previa. Their risk of PTB was 20 percent higher when compared to those aged 30-34 years.

Does invasive testing such as amniocentesis or chorionic villus sampling (CVS) increase the risk of miscarriage?

The two most common invasive tests for women of advanced maternal age are CVS and amniocentesis. The risk of complications from these tests is less than one percent. The tests are often done as a follow up when a cell-free DNA blood test is abnormal.

Over the last decade, both amniocentesis and CVS have been mostly replaced as diagnostic screening tests by so-called "noninvasive tests" that can provide information on risks of the fetus having certain chromosomal conditions. If the cell-free DNA test is abnormal, then a diagnostic test such as amniocentesis or CVS is recommended.

Will my baby be at an increased risk of Down syndrome?

Sign up with babyMed to get pregnancy alerts and updates about your baby's development!