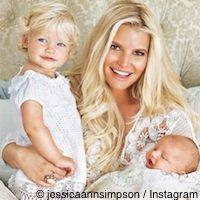 Jessica Simpson spoke candidly about pregnancy - and especially about getting back into shape afterward - with ABC News in an exclusive interview aired in October 2013. Simpson’s second child, a son she named Ace Knute, was born in June. Simpson’s daughter Maxwell was born in May of 2012.

Simpson, 33, said she gained less weight during her second pregnancy than in her first but it was still a lot of weight. She said, "any woman, dealing with their body after pregnancy, you look at yourself and you're like, 'what just happened to me?'"

After her first child was born, Simpson became the spokeswoman for Weight Watchers. She’s turning to the program again after this second pregnancy. She claims what she learned through the program’s point system after the first pregnancy gave her the knowledge to approach the second pregnancy in a healthier manner.

One lesson she claims to have learned is that she can’t eat the whole cake but eating just one piece of it is fine. Although she wasn’t officially on a diet during her pregnancy, she did maintain wiser eating habits than the first time around.

Also helping keep the weight down during her second pregnancy was her decision to remain active throughout the pregnancy. Since she had a toddler just learning to walk, she describes the experience as being “a running pregnant woman.”

Fiance Eric Johnson is very tolerant, according to Simpson. Tolerant of her weight gain and “hormones (that) really can get ya!” Simpson says she’s taking her weight loss strategies week by week to avoid the frustration that can wreck a diet.

In addition to the Weight Watchers point system, some strategies Simpson is using to “feel normal” again include:

By sticking to her one-week-at-a-time strategy, Simpson says her goals stay simple - four workouts a week and sticking with the Weight Watchers point system. She says, “that's my goal this week, and I hope that I can lose from that. If not, I'm going to keep on going and try it the next week. So far, so good. ”