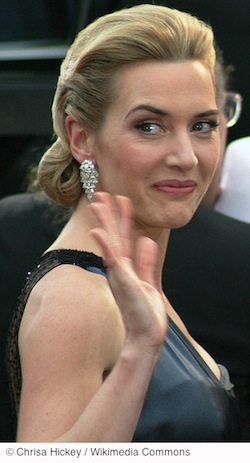 Winslet and third hubby, Ned Rocknroll, welcomed their first child together, a son they named Bear Winslet, on December 7, 2013. The child’s name seems perfectly cozy and cuddly to some but others have not embraced it quite so enthusiastically. Some headlines even referred to it as a “grizzly” name for a baby.

Outsider controversy probably has little effect on the new parents. After all, Daddy Ned was christened Ned Abel Smith but changed his own name legally in 2008. Why go from Ned Abel Smith to Ned Rocknroll? Because he could.

The flamboyant name seems to pair nicely with Rocknroll’s flamboyant life. His uncle, Richard Branson, has made quite a name for himself, too, since establishing Virgin Records in 1969. The company has blossomed into a string of highly successful business ventures all bearing the Virgin moniker.

Rocknroll himself works for his uncle’s private space travel company, Virgin Galactic, which promises a celestial experience to private citizens who can afford the out-of-this-world ticket price.

Winslet has two other children. Her daughter, Mia Honey Threapleton, was born in October 2000 when Winslet was married to the film director, Jim Threapleton. The couple met while working together in 1997 on the film Hideous Kinky.

Winslet’s first son, Joe Alfie Winslet Mendes, was born in May 2003 when Winslet was married to director Sam Mendes.

Although the Winslet / Rocknroll clan calls England home, it’s a pretty sure assumption that the family will spend plenty of time in Hollywood. There, baby Bear is sure to find his name isn’t quite so unusual.

Baby Bear Winslet may some day rub shoulders with Bear Grylls, star of the Discovery Channel TV series Man vs. Wild. Grylls’s real name is Edward Michael Grylls but his bearish nickname seems the perfect choice for the star who’s become famous for surviving in the rugged wilderness against all odds.

As for Winslet herself, there are no unusual names hidden away on a birth certificate. Her parents, Sally Anne (Bridges) and Roger John Winslet, named their daughter Kate Elizabeth Winslet, a name that has served her very well indeed.