There’s a baby on board for Bethany Hamilton and her husband, Adam Dirks. You may know Hamilton from the “Soul Surfer” book or movie based on her recovery and return to surfing after a shark bit off her left arm when she was just 13. You may know the couple as teammates in season 25 (2014) of TV’s The Amazing Race. Bethany (with Adam, sometimes) has made guest appearances on many news and talk shows. She appeared as herself in the movie Dolphin Tale 2. 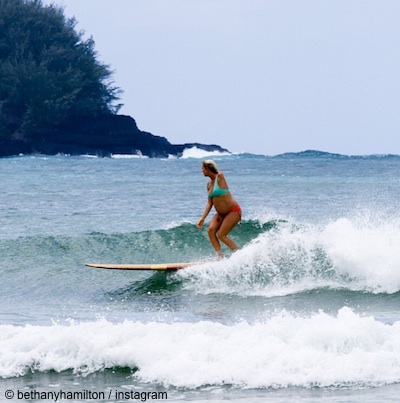 The devoutly Christian couple is also highly active in ministries and support groups around the world that work with people challenged with overcoming life’s difficulties. Her own charitable foundation, Friends of Bethany, “supports shark attack survivors, traumatic amputees, and serves to inspire others through her life story.”

On Halloween morning 2003, 13-year-old Bethany went surfing along a beach near her home in Hawaii with Alana, her best friend, and Alana’s father and brother. Sea turtles filled the water that morning. Bethany took a break, lying on her surfboard with her left arm dangling in the water. A 14-foot tiger shark attacked, biting off her left arm just below the shoulder.

Alana’s family helped Bethany to shore and the father applied a tourniquet before rushing the girl to a nearby hospital. By the time they arrived, Bethany had lost 60% of her blood supply and was on the verge of death due to shock caused by massive blood loss.

Ironically, Bethany’s father was already at that particular hospital, getting prepped for knee surgery. He promptly gave up his reservation in the operating room so his daughter could have it without delay. Bethany was saved.

Before long, a local fisherman, Ralph Young, told investigators that his family of fishermen had recently landed a 14-foot tiger shark with surfboard debris in its mouth. Measurements of the dead shark’s mouth were an exact match to the chunk bitten out of Bethany’s surfboard. Additional forensics led the local police to confirm the shark the Youngs caught was the shark that attacked Bethany.

Bethany had already been competing in surfing contests and her strong competitive spirit would not allow the shark to win. Three weeks after the attack, Bethany once again grabbed a surfboard and headed out to sea. She’s been a winning professional surfer ever since.

Bethany, 25, was always devoutly Christian and attributes her successful recovery and surfing comeback to her strong faith. Her love of God brought her romantic love, too.


In early 2012, mutual friends introduced Bethany to Adam Dirks, 27, a youth minister. In an interview with Entertainment Tonight, Bethany describes Dirk as “the most amazing person of my life. The first thing we did was jump off a cliff together!” Love at first cliff jump, according to Bethany.

A few weeks later, on April 9, Dirk proposed and the couple publicly announced their engagement. They were married the next year on August 18.

On February 8, 2015, Bethany and Adam announced on her blog that they are expecting a son in early June. Bethany is preparing for his birth as she prepares for many important life events: she’s surfing at every possible opportunity. She says she plans to surf as long as pregnancy allows and then turn to swim until her son is born.