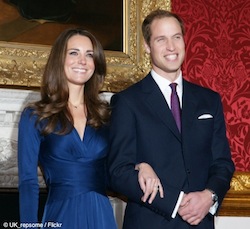 The most anticipated birth of the 21st century is growing near with royal birth plans underway and Catherine Middleton pulling out of the spotlight to rest before her mid-July due date. The royal family has taken extensive measures to control media coverage of the pregnancy and birth, but keeping the media at arm’s length has not stopped legions of royal family followers from trying to guess the royal baby name.

How is the Royal Baby Named?
The royal baby of Prince William and Catherine Middleton will be 3rd in line of succession to the British throne. Changes to royal rules allow the throne to be taken by both male and female children, so the couple must choose a safe name with a strong historical reference. To make matters more difficult, the name must be worthy of a king or queen.

Traditionally, the name is chosen after baby is born, but there is little doubt that the couple has already discussed possible baby names. The name is typically chosen from past leaders and influential persons with strong ties to the royal family.

Royal children are given multiple names, though they are rarely addressed by a surname. The official surname of the royal house is Mountbatten-Windsor. At university, Prince William chose the surname Wales upon enrollment.

Queen Elizabeth’s full name is Elizabeth Alexandra Mary. She named her son, the first in line for the royal throne, Charles Phillip Arthur George. Prince Charles, as he is commonly known, named his son, the second in line and father of the next royal baby, William Arthur Phillip Louis.

What Will the Royal Couple Name the 3rd in Line to the Royal Throne?
Based on family history, a baby girl would have three names and a baby boy would have four names. There is a chance some family names will be repeated, as was the case when Prince Charles gave his first son two of the same names he was given by his mother, Arthur and Phillip.

Possible names for the royal baby, if it's a boy, could include John, Charles, George and Louis. Girl names seem to be a favorite among royal family fans with Mary, Victoria, Elizabeth, Camilla and Diana all being named as possibilities.

Whatever the young royal couple chooses to name the first child, it could be quite a while before the child gets a chance to take the family throne. Queen Elizabeth II has been ruling for more than 60 years. Her son, next in line, is 64 and Prince William is a mere 31. When the baby is born the long-lived royal family will have enough heirs to the throne to cover the next century.