Those sources, however, remain unidentified and no words of confirmation have come straight from the dynamic duo or their official representatives. Mrs. Carter has been dropping a lot of hints lately, though.

Whether Beyoncé, 31, goes out on the town solo, with baby Blue Ivy, or accompanied by hubby Jay-Z, 45, every detail of everything she wears is analyzed in minute detail. Take the gown she wore to a recent gala at the Metropolitan Museum of Art. 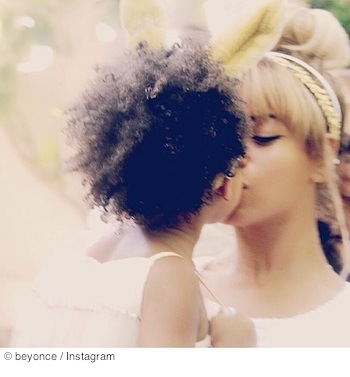 The gown was custom-made just for her by Givenchy. It had an empire waistline high above her tummy, that was draped so artfully and of a fabric patterned so intricately it could easily camouflage an emerging baby bump. Her stunning $5 million wedding ring, designed by Lorraine Schwartz, was an impressive distraction, too.

Shortly after Beyoncé Giselle Knowles married Shawn Corey Carter in a quiet, private ceremony in April 2008, she told People magazine, "We don't play with our relationship," preferring instead to maintain a low profile. The low profile seems to be working for them, in spite of their being entertainment superstars instantly recognized the world over.

Their attention to privacy doesn't seem to be working so well, though, for their fans and the media frenzy that follows them at every possible opportunity.

The birth of the Carters' first child, a daughter they named Blue Ivy Carter, came after months of speculation, guessing games, and "exclusive" scoops by various factions of the media. Beyoncé had already suffered a miscarriage and the couple wanted to make sure all was well the second time before announcing the impending arrival of their first child.

What's a child to do when her parents are two of the biggest names in the entertainment industry? Blue made a record when she was just two days old. Well, she contributed to it, anyway.

Blue Ivy was born on January 7, 2012. On January 9, her daddy released a song, "Glory," that he dedicated to his daughter. The song describes the couple's struggle through pregnancy, miscarriage, and the glorious birth of their daughter. Baby Blue's cries were added at the end of the song and she is credited ("BIC") as collaborator on the record, making her the youngest person ever to have a song on Billboard's chart of top songs (debuted at #74).

In recent months, Beyoncé has mentioned in interviews how the couple would like to have more kids someday and how it would be so nice if Blue had a sibling, comments that got rumor mills working overtime.

New-baby speculation reached a fever pitch last week when Beyoncé cancelled a performance in Antwerp, Belgium, due, officially, to the need for rest following exhaustion and dehydration.

Is she or is she not? The question remains unanswered — officially — although E! News claims to have the exclusive official story from "multiple," but unnamed sources.