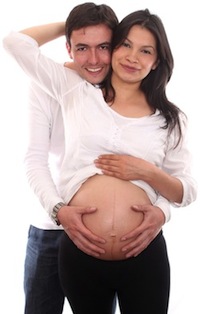 Cancer. The word alone strikes fear in just about everyone. When it’s ovarian cancer that will surely affect a woman’s fertility before she has the family she wants, there’s a great deal of grief and heartache alongside that fear. From the midst of such pain comes the story of Vali, a courageous young woman from Australia who has beaten the odds quite soundly. Chemotherapy treatments cured ovarian cancer but destroyed her ovaries. Even so, she’s now pregnant with twins. Twins growing from her very own eggs, thanks to a revolutionary new in vitro fertilization (IVF) procedure that’s never been done successfully before.

Known simply by Vali to preserve her privacy, this young woman is 26 weeks into her pregnancy with twins after seven years of waiting. When cancer was diagnosed, her team of medical specialists at the Melbourne IVF and the Royal Women’s Hospital removed tissue from Vali’s non-cancerous ovary and froze it for future use. Since her diagnosis was ovarian cancer, the medical team made sure there were absolutely no cancer cells present in the frozen ovarian tissue.

Once cancer-free and ready to start a family, Vali’s team of medical professionals, led by Kate Stern, her fertility specialist, began a series of treatments that would last seven years and require testing almost every day of those long, hope-filled years.

Instead of transplanting Vali’s ovarian tissue back into the ovary, it was grafted to the front wall of her abdomen in two places, left and right. These two grafts, growing entirely outside the pelvic cavity that houses a woman’s reproductive organs, were hormonally stimulated until egg follicles developed and produced two healthy eggs.

Once two viable eggs were available, Vali’s medical team removed them and fertilized them using IVF procedures. These now-fertilized eggs were returned to Vali’s body, where they were transplanted into her uterus and her pregnancy has progressed in normal fashion from there.

A similar post-cancer ovarian tissue transplant in Australia proved successful when healthy ovarian tissue was transplanted back into the ovary. About 30 such procedures have been done around the world. Vali’s is the first time ovarian tissue has produced healthy eggs outside the pelvic area, a process that offers hope to women suffering from various medical conditions that affect the reproductive organs and pelvic cavity in ways that render them infertile.

The Royal Women’s Hospital expects to repeat the technique used on Vali and has collected approximately 300 ovarian tissue samples from women who hope to repeat Vali’s success story. Ovarian cancer strikes more than 1300 Australian women every year, about 39 percent of whom are under the age of 60

Vali and her partner, Dean, are absolutely thrilled at the impending arrival of their miracle babies.