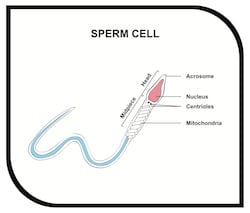 Researchers from Brown University recently published a retrospective study on correlation between semen qualities and sperm length in humans. Studies have been published on the correlation in animals, but this is the first human study - according to study authors. Data for the study was pulled from Sheffield Teaching Hospital NHS Foundation Trust records. In all, 500 patient records were accessed, but researchers pulled just 103 random records for the study. All men received semen analysis as part of infertility evaluation.

When researchers looked at sperm length and compared the lengths to manually-noted semen qualities, there appeared to be common characteristics. One of the biggest findings was the correlation between length variance and motility. When sperm components were measured, fewer length variances between components resulted in increased motility.

Conclusion: While researchers noted that samples were collected as part of fertility evaluation, which could impair overall results, the findings from the study could help give fertility experts a more well-rounded look at overall fertility, spermatogenesis efficacy and function of the testes.