Sign up for the waitlist for our new app, Obie!
Getting Pregnant » Fertility Treatment

Fertility Treatments: What is Vitrification? 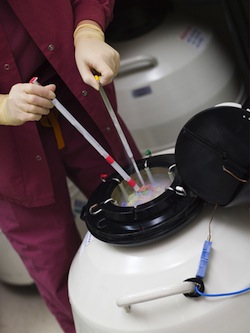 Freezing sperm, eggs and embryos for later use has been part of reproductive science for many years, though the traditional freezing process is flawed. During the time it takes to move a substance from room temperature to freezing, water collects and ice crystals form. Vitrification is a fast freezing process that prevents ice crystal formation; protecting cells from damage.

Traditional Freezing
The process of traditional freezing moves a substance from room temperature to below the freezing point. The freezing process causes water (now ice) to collect around molecules placing pressure on the molecules. That pressure causes molecules to shrink and can cause damage.

Vitrification Process
Vitrification is a freezing process that uses cryoprotectants to prevent damage to molecules. The cryopreservants prevent the formation of ice crystals around molecules. The end result is the same – the substance is frozen solid, but the cryopreservant prevents the formation of ice crystals during the fast freeze using liquid nitrogen.

Benefits Over Traditional Freezing
Vitrified tissue is protected from damage caused by ice crystals formed with traditional freezing for flash freezing. The difference is visible to the naked eye when used on larger organs like kidneys or liver tissue. Vitrified tissue looks the same as it did at room temperature, whereas traditional freezing causes a layer of ice crystals to form on the organ –and other tissues and cells – altering the look and physical structure.

Male Fertility
Sperm vitrification starts with sperm harvesting, typically from a sample provided by the patient. Sperm is removed from semen and plasma components. Doctors then place the sperm in a sugar solution and plunge the solution in liquid nitrogen to freeze. Vitrified sperm can be held frozen in a liquid nitrogen solution or a deep freezer until needed for conception.

Female Fertility
Vitrification is used to freeze eggs and embryos. Harvesting eggs involves taking prescription medications to promote multiple egg maturation and release. The eggs are then removed from the body and frozen or fertilized (embryo) then frozen. Where traditional slow freezing causes eggs to shrink and allows ice crystals to form around the egg wall, vitrification literally suspends the egg or embryo in a glass-like state.

Benefits to Reproduction
Without ice crystals and shrinking, reproductive success after thawing is improved in most cases of vitrification. Experts claim about 75% of vitrified sperm show healthy motility after the thawing process compared to about 30% of sperm traditionally frozen. In female fertility, vitrification increases the viability of eggs after thawing by up to 75%. Experts claim up to 30% of traditionally frozen embryos are not viable after thawing, but vitrification offers a successful thawing rate of around 95%.

Vitrification is the process of flash freezing that moves a substance from a natural state to a frozen state 600 times faster than traditional freezing. Ice crystals have no time to form around cellular walls. Upon thawing, the substance acts almost identically to a fresh sample of the same substance. For men and women using vitrification as part of reproductive preservation, this means better outcomes and increased likelihood of conception.